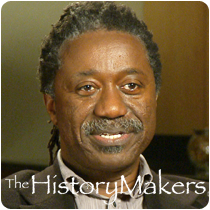 Favorite Color:
Blue
Favorite Food:
Seafood
Favorite Time of Year:
Fall
Favorite Vacation Spot:
Paris, France
Favorite Quote:
For God did not give us a spirit of fear, but a spirit of power, of love and of a sound mind.

Favorite Color:
Blue
Favorite Food:
Seafood
Favorite Time of Year:
Fall
Favorite Vacation Spot:
Paris, France
Favorite Quote:
For God did not give us a spirit of fear, but a spirit of power, of love and of a sound mind.

See how Herbert Winful is related to other HistoryMakers

Electrical Engineer Herbert Winful was born on December 12, 1952 in London, England and raised in Cape Coast, Ghana in West Africa. His father Herbert Francis was an engineer, and his mother Margaret Ferguson Graves was a teacher. As a child Winful was mesmerized by lasers and often dreamed of developing his own. As a sophomore attending MIT Winful was mentored by Dr. Hermann A. Haus – National Medal of Science honoree and pioneer in the field optical communications. Winful received his B.S. degree in electrical engineering in the 1975 from the Massachusetts Institute of Technology. In 1981, he graduated from the University of Southern California earning his Ph.D. degree in electrical engineering. Dr. Joh Marburger – former science advisor to President George H.W. Bush – guided Winful’s groundbreaking work on non-periodic structures.

From 1980 to 1986, Winful worked at GTE Laboratories (now Verizon Laboratories) in Waltham, Massachusetts. The Electrical Engineering and Computer Sciences (EECS) department at University of Michigan hired Winful as an associate professor in 1987. Through research and teaching he made fundamental contributions to multiple sub-disciplines in hid field: nonlinear fiber optics, nonlinear optics in periodic structures and nonlinear dynamics of laser arrays, propagation of single-cycle pulses. was promoted to full professor in 1992, and one year later the University of Michigan promoted him to an endowed professorship – Thurnau Professor. Throughout his career Winful studied problems involving the relationship between laser arrangement and production of power. Winfield most significant scholarly achievement was solving the scientific paradox of quantum tunneling time.

Winful’s contributions have been recognized by professional and academic organizations. He was named a Fellow of the Optical Society of America and the American Physical Society and the Institute of Electrical and Electronic Engineers. The University of Michigan recognized Winful with the Amoco/University Teaching Award, the State of Michigan Teaching Award and the EECS Professor of the Year Award.

Herbert Winful was interviewed by The HistoryMakers on 10/23/2012.

See how Herbert Winful is related to other HistoryMakers
Click Here To Explore The Archive Today!