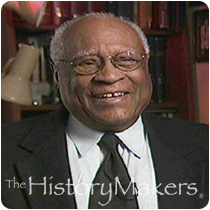 See how Herbert Paul Douglas, Jr. is related to other HistoryMakers
Donate Now

Herbert Paul Douglas, Jr., sales executive and Olympic medalist, was born March 9, 1922 in Pittsburgh, Pennsylvania. His father owned an automobile repair shop and was reported in Ebony magazine as the first blind African American to use a seeing eye dog. Douglas attended Gladstone Elementary School and Gladstone Junior High School. As a teenager, he idolized Jesse Owens’ performance in the 1936 Olympics. He was playing football and running track when he graduated from Allderdice High School. Attending the University of Pittsburgh, Douglas won three collegiate titles in the long jump. He earned his B.S. degree from the University of Pittsburgh in 1948. That same year, Douglas won the Bronze Medal for a 24 foot 8.75 inch long jump in the London Summer Olympics. Returning to the University of Pittsburgh, Douglas completed his M.Ed. degree in 1950.

Douglas worked as night manager for his father’s auto business until the Pabst Brewing Company hired him in 1950. At Pabst, he rose from sales representative to southern district manager. Douglas served as Pabst’s national special markets manager from 1965 to 1968. From 1977 to 1980, he worked as vice president of urban market development for Schieffelin and Somerset Co., where he helped popularize Hennessy Congac X.O, V.S.O.P, V.S and other brands in the African American community. Douglas has worked as an urban marketing consultant since 1987.

In 1980, Douglas founded the International Amateur Athletic Association, Inc. (IAAA), of which he is president. He has also served on the board of directors of the Jesse Owens Foundation and the University of Pittsburgh. Douglas, a member of the NAACP and Urban League, was inducted into the Pennsylvania Sports Hall of Fame in 1992. Semi-retired, he lives with his wife in Philadelphia. He was selected by Ebony magazine as one of the 100 Most Successful Black Men.

See how Herbert Paul Douglas, Jr. is related to other HistoryMakers
Donate Now
Click Here To Explore The Archive Today!