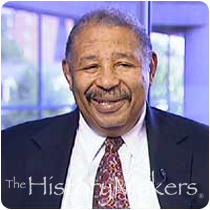 See how Herbert P. Wilkins, Sr. is related to other HistoryMakers
Donate Now

While other investors cursed the dot-com bust in the late 1990s, business executive Herb Wilkins amassed a fortune. Born to Katherine and William Wilkins in Boston on January 9, 1942, Wilkins has accumulated his riches by tapping into minority businesses in the communication industry as managing general partner of Syncom Capital Corporation.

Wilkins attended public school in his hometown of Boston. After receiving his bachelor's degree from Boston University in 1965, Wilkins graduated from the Harvard School of Business in 1970 and began a long, successful career in finance and management consulting. Wilkins operated his own consulting company, Wilkins & Company, from 1975 to 1977, before taking over as president of Syndicated Communications in Washington, D.C. He served in that capacity through 1989 before taking posts as managing general partner of Syncom Capital and president of Syncom Management Company.

With Syncom, Wilkins developed a profitable strategy of investing in communications companies that targeted inner-city neighborhoods. The corporation's long-term investment in Radio One, a black company that was the fastest-growing radio broadcasting company in 2000, paid tremendous dividends when the corporate stock went public in 1999. Syncom's assets reached $150 million and Wilkins' net worth topped the $75 million mark. Wilkins also served as director of BET Holdings, the parent company of Black Entertainment Television.

In addition to his business positions, Wilkins has served on the boards of several companies and organizations geared toward minority broadcasting and communication. He worked as director of the National Association of Minorities in Cable TV and also was head of Chicago Cable Television. For his efforts to support rising minority communication companies, Wilkins has received several honors and awards and was named to the FCC's Advance Committee on Minority Ownership in 1984. Wilkins is married to Sheran R. Wlikins and has three children.

See how Herbert P. Wilkins, Sr. is related to other HistoryMakers
Donate Now
Click Here To Explore The Archive Today!