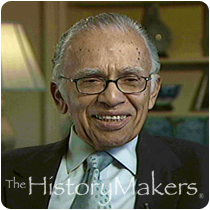 See how Herbert DeCosta, Jr. is related to other HistoryMakers
Donate Now

Architect and building contractor Herbert Alexander DeCosta, Jr. was born on March 17, 1923 in Charleston, South Carolina to Herbert A. DeCosta, Sr. and Julia Craft DeCosta. DeCosta’s interest in architecture began when he was thirteen years old while working for the family construction business which was founded in 1899 by his grandfather Benjamin DeCosta. He graduated high school from the Avery Institute in Charleston in 1940 and went on to receive his B.A. degree from Iowa State College in architectural engineering in 1944.

Prior to joining the family business in 1947, DeCosta worked as an architectural engineer for the National Advisory Committee for Aeronautics (NACA, now known as NASA). He returned to the DeCosta Company as Vice President and became President, serving there until his retirement in 1989. Under his leadership, the company undertook major renovation projects to preserve the historical landscape of Charleston and other areas. One of his most notable projects was the restoration of the Herndon Mansion in Atlanta, Georgia. This mansion was owned by one of the wealthiest African American men in America, Alonzo Herndon, founder of the Atlanta Life Insurance Company.

The H.A. DeCosta Company was named one of the top 100 black businesses in the nation by Black Enterprise magazine in 1979. Upon his retirement in 1989, DeCosta continued to be active in the field of preservation as a restoration consultant and project manager.

DeCosta’s work has been featured in various magazines and newspapers across the country. He has received various awards and recognitions for his contribution to Charleston, including South Carolina’s Governor’s Award and the Frances R. Edmunds Award for Historic Preservation. DeCosta passed away on December 28, 2008.

See how Herbert DeCosta, Jr. is related to other HistoryMakers
Donate Now
Click Here To Explore The Archive Today!