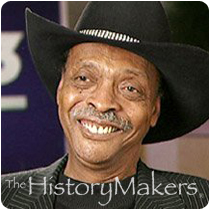 See how Herb Kent is related to other HistoryMakers
Donate Now

Born on October 5, 1928, Herb Kent was raised on Chicago's South Side, where he received early musical inspiration from the rhythm & blues clubs that dotted his neighborhood. Often, he stood outside the windows of these clubs listening to the tunes being played inside. As a young teen, he became involved in drama workshops and studied classical music at Hyde Park High School. By age sixteen, Kent had already given an on-air performance on Chicago's prestigious WBEZ Radio station with his workshop. The year was 1944, and Kent's passion for radio was solidified.

During the remainder of the decade, he continued to participate in workshops, particularly with the Skyloft Players, a local theater company. He built scenery and performed in the ensemble along with the other players for several years. The theater was a perfect testing ground for the improvisational skill required to host a radio program, and in this environment Kent excelled. Finally, in 1952 he was given a salaried position as an on-air radio personality with WGES Radio, where he hosted a one-hour country and western show. He developed a distinctive on-air style and, with it, a substantial fan base. After three years with the station, he moved on to the Head Announcer position at WBEE Radio.

Throughout the following two decades, Kent hosted radio shows on several stations in Chicago. Though each station had a platform and a format of its own. Kent's style of humor, critique, and banter was immediately recognizable to his loyal listeners, no matter what station broadcast his shows. One of his most iconic stints was with WVON Radio between 1962 and 1970. Many members of the broadcasting community have stated that Kent greatly helped to launch the careers of such R&B artists as The Temptations, Minnie Ripperton, Curtis Mayfield, and Smokey Robinson because of his enthusiastic, on-air embrace of their music. During his broadcast on WVON, Kent became widely known as the "Voice of the People" for Chicago's South Side, the spokesperson for local African America. He became known widely as "Herb Kent, the Cool Gent", and even served as producer for an R&B group named The Cool Gents.

During the 1960s, Kent also became known as a prominent Civil Rights activist because of his outspoken views on the lack of social and economic equality in America. For several years, he broadcasted his WVON show live from a different high school each week so that he could provide community youth with an alternative to the typical Friday night activities. After his retirement, he continued his work with community leaders to create programs that provided a productive environment for South Side youth.

A few of Herb Kent's many awards and recognitions include his 1995 induction into the Museum of Broadcast Communications Radio Hall of Fame. In 1996, Kent witnessed the official dedication of a street on Chicago's South Side in his honor: "Herb Kent Drive". He was also recognized by the dedication of a United States postal stamp bearing his image which was included in the 1998 "Golden Days of Radio" series. The following year, Herb Kent was named the Honorary Mayor of Bronzeville by the citizens of that South Side community.

At the time of the interview, Kent was a columnist at N'Digo Magazine, the Chicago-based African American periodical.

See how Herb Kent is related to other HistoryMakers
Donate Now
Click Here To Explore The Archive Today! 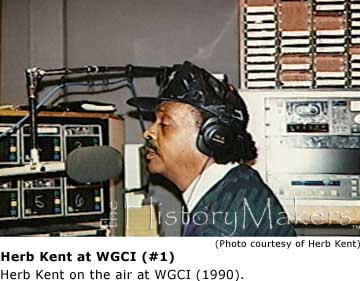 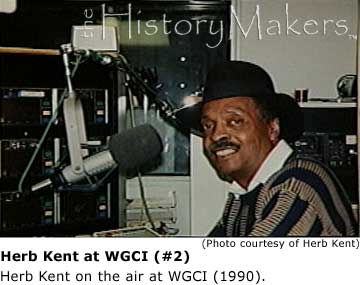