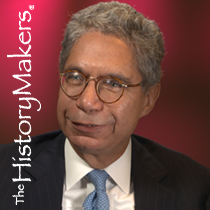 Favorite Color:
Navy Blue
Favorite Food:
Grilled Chicken
Favorite Time of Year:
Spring
Favorite Vacation Spot:
Martha's Vineyard, Paris, France
Favorite Quote:
If You Don't Know Where You Are Going Any Road Will Get You There.

Favorite Color:
Navy Blue
Favorite Food:
Grilled Chicken
Favorite Time of Year:
Spring
Favorite Vacation Spot:
Martha's Vineyard, Paris, France
Favorite Quote:
If You Don't Know Where You Are Going Any Road Will Get You There.

See how Henry W. McGee is related to other HistoryMakers
Donate Now

McGee worked as a writer for Newsweek from 1974 to 1977 in New York and Washington D.C. After he obtained his M.B.A. degree, he was hired as a manager of film acquisition for Home Box Office (HBO), which was then a new venture at Time, Inc. McGee went on to serve as director of program acquisition for Time-Life Films from 1980 to 1981, director of Cinemax Program Planning and HBO Family Programming from 1981 to 1983, director of HBO Enterprises from 1983 to 1985, vice president of home video from 1985 to 1988, and senior vice president of programming for HBO Video from 1988 to 1995. In March of 1995, McGee was promoted to president of HBO Home Entertainment. Under his leadership, HBO became the leading force in the TV-to-DVD industry and a pioneer in using the Internet for marketing and sales. After retiring from HBO in 2013, McGee joined the faculty of Harvard Business School as a senior lecturer.

In 2004, McGee was elected to the board of AmerisourceBergen, the global pharmaceutical services company, and in 2017 was named chairman of the company’s Governance and Nominating Committee. In 2015, he joined the board of TEGNA, Inc., a broadcast and digital media company that owns the largest number of affiliates of the NBC television network. McGee also served on several nonprofit boards, including as director of the Black Filmmaker Foundation board since 1985, and the Pew Research Center board since 2014. He also served as director and president of the Film Society of Lincoln Center board, and the Alvin Ailey Dance Theater Foundation board. He served as a director of the boards of the Save the Children Fund, the Time Warner Foundation, Studio Museum in Harlem, and the Sundance Institute. Additionally, McGee served on the advisory board of Harvard University’s Hutchins Center for African & African American Research.

McGee was inducted into Variety’s Home Entertainment Hall of Fame, and the National Association of Minorities in Communication Hall of Fame. He also received the Professional Achievement Award from the Harvard Business School African American Alumni Association, and was named by Black Enterprise as one of the “50 Most Powerful African Americans in the Entertainment Business.” In 2018 the National Association of Corporate Directors named McGee one of the 100 most influential people in the boardroom community.

McGee and his wife, Celia, have one daughter, Honor.

Henry W. McGee was interviewed by The HistoryMakers on September 22, 2016.

See how Henry W. McGee is related to other HistoryMakers
Donate Now
Click Here To Explore The Archive Today!