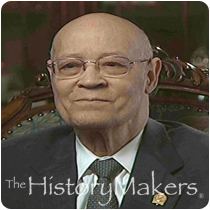 See how Henry Ponder is related to other HistoryMakers

Henry Ponder was born on March 28, 1928 in Wewoka, Oklahoma. He was the eleventh of fourteen children born to Frank and Lillie Mae Ponder. Ponder excelled in academics and participated in his high school student council as the class president. After hearing a speech by Mary McCloud Bethune, Ponder was inspired to become a university president. He graduated from Douglas High School in 1946 and attended Langston University, where he pledged the Alpha Phi Alpha Fraternity and received his B.S. degree in agriculture in 1951.

Ponder served as both Chair and Assistant Professor for the Department of Agriculture and Business at Virginia State College in Petersburg, Virginia. He also served as the Chairman of the Department of Business and Economics of Fort Valley State College in Fort Valley, Georgia. Additionally, Ponder was the Vice President of Alabama A&M University in Normal, Alabama. In 1973, he fulfilled his dream by becoming President of Benedict College in Columbia, South Carolina. After an eleven year tenure, he became the President of Fisk University in Nashville, Tennessee for twelve years. While at Fisk, Ponder was honored as one of the “100 Most Effective College Presidents in the United States.”

In 1996, Ponder left Fisk University to serve as the CEO and president of the National Association for Equal Opportunity in Higher Education. In early 2002, he became President of Talladega College in Alabama. While in his presidency, Ponder helped retain the 160-year-old institution’s accreditation with the Southern Association of Colleges and Schools.

Ponder currently lives on Hilton Head Island in South Carolina with his wife of fifty-five years, Eunice. They have two adult daughters.

Ponder was interviewed by The HistoryMakers on January 29, 2007.

See how Henry Ponder is related to other HistoryMakers
Click Here To Explore The Archive Today!