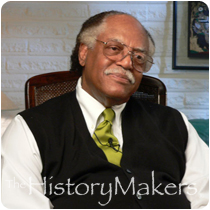 See how Henry H. Brown is related to other HistoryMakers

Henry Hartford Brown was born on November 17, 1930 in Houston, Texas. Brown attended Xavier University in New Orleans, Louisiana and graduated from Texas Southern University where he also did graduate study.

Brown served as an adjunct professor at Howard University School of Business and Industry. In 1959, he started his career at Anheuser-Busch, Inc. as a wholesaler representative. Brown was recognized as a superior sales achiever, was promoted and received “The Adolphus Award,” the company’s highest recognition for excellence in sales, named after the founder of Anheuser-Busch and the Fortune 500 Corporation. In 1975, Brown developed Budweiser’s Great Kings and Queens of Africa, an educational program that showcases the rich ancestral history of African Americans. In 1980, he was named Vice President of Marketing Development at Anheuser-Busch for his meritorious contributions resulting from his many innovative programs and projects. In 1990, Brown was elected as Senior Vice President of Anheuser-Busch, becoming the first African American to be elevated to the Senior Executive Suite of the world’s largest brewery. In 1994, Brown retired from Anheuser-Busch as Senior Vice President after thirty-five years of work and launching major initiatives for the company including the Budweiser Community Health Mobile, Budweiser’s Living Legends and The Lou Rawls/UNCF Parade of Stars (He assumed a key role in developing the initial corporate sponsored telethon.).

Brown has received several honors and awards during his career including the Thurman Award from the Association for Retarded Children, 1992; the Presidential Award from the National Conference of African American Mayors, 1994; the Friend of the Community Award from the State of Texas, 1997; and the Alpha Phi Alpha Fraternity Lifetime Achievement Award, 2004.

Brown was interviewed by The HistoryMakers on August 9, 2007.

See how Henry H. Brown is related to other HistoryMakers
Click Here To Explore The Archive Today!