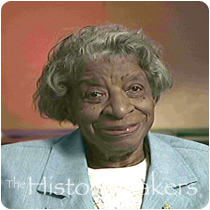 See how Henrietta Smith is related to other HistoryMakers
Donate Now

Library science professor and school media librarian Henrietta Mays Smith was born on May 2, 1922, in Harlem, a neighborhood in New York. Smith is the daughter of Nettie Johnson Mays, a domestic worker, and Henry Lucas Mays, a chef who worked on riverboats on the Hudson. Smith attended Hunter College, studying English and history. She earned her B.A. degree from Hunter College in 1943 and in 1946, she received her B.S.L.S. degree from Columbia University. Smith then moved to Tallahassee, Florida, where she served as a cataloguer at Florida A&M University for the next two years. Dr. Smith received her M.S.L.S. degree from Columbia University in 1959.

Smith started her career working for Florida A&M University's Library as a cataloger and later returned to New York to complete her M.S.L.S. degree. She also worked at the Countee Cullen Branch of the New York Public Library as a children's librarian where she become interested in storytelling and the power of oral traditions. In 1949, she married Isaiah Courtney Smith, a young civil rights lawyer. Returning once again to Florida, Smith worked for Broward County Public Schools, as a school media specialist. In 1975, at the age of fifty three, she received her Ph. D. degree from the University of Miami and joined the faculty of the Florida Atlantic University's School of Education. After ten years at Florida Atlantic, she left the institution and joined the faculty of the University of South Florida's School of Library Science where she was the first and only African American faculty member on campus. She specialized in children's librarianship and the art of storytelling.

Since retiring in 1993, Smith has been remained active in the library science field. She has sat on many American Library Association (ALA) selection committees for several literary awards such as the Coretta Scott King Awards, the Caldecott Award, and the Newbery Award. In 1994, she edited the book The Coretta Scott King Book Awards: From Vision to Reality. She has been a board member of the Florida Association of Media in Education (FAME) and the Florida Library Association (FLA) and has continued her general membership. She has also been involved with Storytellers Association, an association which teaches and develops multicultural storytelling and the oral tradition. In 2000, she wrote the introduction to Lift Every Voice and Sing: A Pictorial Tribute to the Negro National Anthem.

Smith lives in Florida with her husband, I.C. Smith, now a retired judge. She has two adult children, Cynthia Smith Jackson and Robin Smith. In 2008, she was honored by the American Library Association (ALA) as the recipient of the Association for Library Service to Children's (ASCL) Distinguished Service Award for Smith's accomplishments and contributions to children's librarianship.

Henrietta Mays Smith was interviewed by The HistoryMakers on August 13, 2007.

See how Henrietta Smith is related to other HistoryMakers
Donate Now
Click Here To Explore The Archive Today!