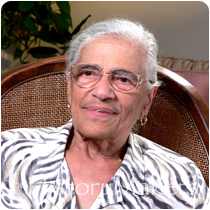 "You Get Back What You Give."

Licensed practical nurse and trombonist Helen Elizabeth Jones Woods was born in 1923 in Meridian, Mississippi. Woods began her life in a Mississippi orphanage for white children. When it became obvious that she was not white, Woods was adopted by Professor Laurence Clifton Jones, the founder and director of Piney Woods Country Life School, and his wife. After the sudden death of Jones’ wife, Woods, at the age of four, became part of the general population of the school where she enjoyed music and special programs. Helen Keller, George Washington Carver and other luminaries visited the Piney Woods campus. Woods was a member of the school’s traveling and fundraising band, Cotton Blossom Singers, which was directed by Consuela Carter. In 1937, Jones formed the Swinging Rays of Rhythm, another all-girl band led by Carter. The band toured extensively throughout the eastern United States to raise money for the school. In 1941, Woods and several other girls left Piney Woods when they found out that some of them would not graduate because they had been touring with the band instead of going to class.

The band relocated to Arlington, Virginia where it was renamed The International Sweethearts of Rhythm due to the diverse racial and ethnic composition of its members. Comprised of African American, Asian, Mexican, Native American, and Caucasian girls ranging in age from fourteen to nineteen years old, the sixteen-piece band continued under the management of Daniel Gary. Although the band’s lineup changed frequently, it attracted many talented musicians. The original members included Woods on trombone, Pauline Braddy on drums and Willie May Wong on saxophone. Anna Mae Winburn, former leader of the Cotton Club Boys in North Omaha, Nebraska, was appointed the band leader. The band’s first composer was Eddie Durham, with Jesse Stone taking over in 1941. Later members included trumpeter-vocalist Ernestine “Tiny” Davis and saxophonist Vi Burnside. The band headlined venues such as the Apollo Theater and Washington, D.C.’s Howard Theatre, where in 1941 it set a box office record of 35,000 patrons in a single week. As a member of the band, Woods was one of the first African American women to tour with the United Services Organizations (USO) during World War II, traveling to France and Germany. Groundbreaking in its all-female and racially integrated lineup, The International Sweethearts of Rhythm also received great critical acclaim for its musical talent.

After the original band dissolved in 1949, Woods traveled to Omaha where she eventually settled down and married William A. Woods, the first black man to get an accounting degree from Creighton University. Woods served as a licensed practical nurse at Douglas County Hospital for twenty-three years, retiring in the 1970s. She is the mother of four children, including media mogul Cathy Hughes. Woods was inducted into the Omaha Black Music Hall of Fame in 2007.

Helen Jones Woods was interviewed by The HistoryMakers on October 6, 2007.