Information about Hattie B. Dorsey 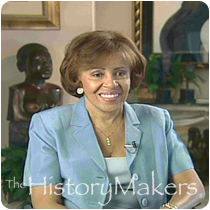 Favorite Color:
Blue, Green
Favorite Food:
Soul Food
Favorite Time of Year:
Spring
Favorite Vacation Spot:
Beaches
Favorite Quote:
Do Unto Others As You Would Have Them Do Unto You.

Favorite Color:
Blue, Green
Favorite Food:
Soul Food
Favorite Time of Year:
Spring
Favorite Vacation Spot:
Beaches
Favorite Quote:
Do Unto Others As You Would Have Them Do Unto You.

See how Hattie B. Dorsey is related to other HistoryMakers

Founder and former president of the Atlanta Neighborhood Development Partnership (ANDP), Hattie Beleatha Dorsey was born the eldest of eleven children on May 31, 1939 in Teachey, North Carolina. When Dorsey was an adolescent, her family moved to New York City where she attended Charles Evan Hughes High School. As a high school student, Dorsey took courses in fashion design and interior design. The Dorsey Family moved to Atlanta where she attended David T. Howard High School. Her father was the residing pastor of the Tabernacle Baptist Church in Atlanta and chairman of the Southern Christian Leadership Conference’s Operation Bread Basket. She is a first cousin to the father of gospel music great Thomas A. Dorsey.

After attending Spelman College, Dorsey transferred to Clark Atlanta University. In 1964, Dorsey graduated from Clark Atlanta University with her B.S. degree in secretarial science. Dorsey performed secretarial work for various companies, until she became an administrative assistant for the National Urban League. Dorsey continued her civil rights work by working on the NAACP’s legal defense team throughout the 1970s and 1980s, helping to bring landmark legal suits against those who practiced housing discrimination. Dorsey worked for Stanford Mid - Peninsula Urban Coalition on Affordable Housing in San Francisco, California before becoming director of the Atlanta Neighborhood Development Partnership.

As president of ANDP, Dorsey worked to solidify Metro Atlanta neighborhoods and community development corporations. Under Dorsey’s leadership, issues related to public housing became a regional priority. A larger part of Dorsey’s success as ANDP’s president resided in her ability to develop financial resources from all sectors – private, public and philanthropic. In 1995, ANDP launched a $16 million capital campaign to accelerate housing construction and innovation in preparation for the Olympic Games.

Dorsey and her daughter, Victoria “Michelle,” live in Atlanta.

Dorsey was interviewed by The HistoryMakers on September 13, 2007.

See how Hattie B. Dorsey is related to other HistoryMakers
Click Here To Explore The Archive Today!