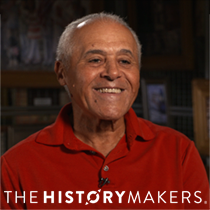 See how Harry Seymour is related to other HistoryMakers
Donate Now

Educator and painter Harry N. Seymour was born on August 30, 1942, in Detroit, Michigan, to Matilda Dawson and famous black golfer Robert Seymour. Raised in Ecorse, Michigan, Seymour attended Miller Elementary School, Ecorse Junior High School, and graduated from Ecorse High School in 1960. He attended Howard University where he earned his B.A. degree in business administration in 1964. After graduation, he worked as a manager and buyer at F&R Lazarus & Co., and in 1998, he entered graduate programs at The Ohio State University, earning his M.A. degree in speech pathology in 1968, and his Ph.D. degree in speech and hearing science in 1971.

Seymour served as a professor of speech and hearing at the University of Massachusetts Amherst from 1971 to 2002, becoming a full professor in 1987, and chairing the Department of Communication Disorders from 1992 to 2002. Seymour’s scholarship focused on child language disorders, and he published over 40 articles, and made over 100 professional presentations addressing nonbiased assessment of speech and language disorders among African American children. He was the lead author of the Diagnostic Evaluation of Language Variation (DELV), and was the principal investigator on the $2,700,000 National Institute of Deafness and Communication Disorders grant to develop the DELV, the only test in speech and language designed and standardized specifically to reduce linguistic and cultural bias in testing African American children who speak nonmainstream American English. After retiring from the University of Massachusetts Amherst in 2002, Seymour moved to Martha’s Vineyard, Massachusetts, where he began a professional career as a painter, and developed a unique method and style of painting, combining traditional scratchart methodology with pan and wax pastels.

Seymour is a fellow of the American Speech-Language Hearing Association (ASHA) and the Kellogg National Fellowship Program, and received the Distinguished Alumni Award from Howard University’s School of Communications. He also received the Honors of the National Black Association of Speech, Language and Hearing for his research and mentoring of African American students. His other awards include the ASHA Multicultural Service Award, was commended in Resolution #63, by the Mississippi State Senate for his research on behalf of African- American children, and the editor’s Award: Language, Speech and Hearing Services in Schools. In 2003, Seymour was presented the highest recognition from his professional association—the Honors of the ASHA for distinguished contributions to the field of Speech-Language Pathology.

Seymour and his wife, Charlena Seymour, have a son and daughter, Harry A. Seymour and Shayna Seymour Carr.

Harry N. Seymour was interviewed by The HistoryMakers on August 19, 2018.

See how Harry Seymour is related to other HistoryMakers
Donate Now