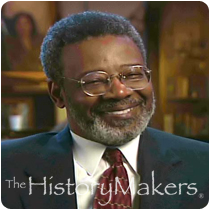 See how Harry Robinson, Jr. is related to other HistoryMakers
Donate Now

Museum director, Harry Robinson, Jr. was born in New Orleans, Louisiana on September 16, 1941. His mother, Ruth, and father, Harry Sr., raised their family in Raceland Louisiana, where Robinson attended Pitman and Kent Hadley elementary schools. The family moved to Thibodaux, Louisiana the year Robinson entered high school. He attended C.M. Washington High School where he came under the tutelage of his industrial arts teacher. However, health reasons prompted Robinson to instead major in history and minor in library science, and he received his B.A. degree from Southern University in 1964.

After earning his Ed.D in 1969 at the University of Illinois at Urbana-Champaign, and heading up special collections for Alabama State University, Robinson joined Bishop College in Dallas as librarian and museum director in 1974. With his negotiation skills, Robinson was able to acquire many collections for the museum. Under his leadership, a new facility was built in 1984 as Fair Park in Dallas to house the collection. The collection includes African American decorative arts, Sepia Magazine’s photo archive and the carefully researched archaeological specimens of the Freedmen’s Cemetery Collection. Robinson has developed the African American Museum in Dallas into a nationally recognized destination for people from all over the world.

See how Harry Robinson, Jr. is related to other HistoryMakers
Donate Now
Click Here To Explore The Archive Today!