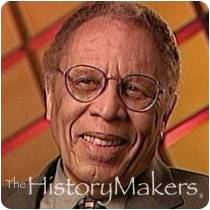 See how Harry Porterfield is related to other HistoryMakers
Donate Now

Harry William Porterfield was born on August 29, 1928 in Saginaw, Michigan to Viola and Harry, Sr. After moving to Chicago, Illinois in 1964, he has gone on to become one of Chicago's best-loved media personalities, known for his series, Someone You Should Know.

Porterfield graduated from Saginaw's Arthur Hill High School in 1946 and then received an A.S. from Bay City Junior College in Bay City, Michigan. Although he enrolled in the University of Michigan, his studies were interrupted after just one year. In 1951, Porterfield was drafted by the Army. He served less than two years in Germany and attained the rank of Sergeant. In 1954, he earned a B.S. in chemistry from Eastern Michigan University at Ypsilanti.

Porterfield began his broadcasting career in 1955 when he joined Saginaw's radio station WKNX as a jazz disc jockey. He worked as a continuity editor, as well as a cameraman and stagehand at WKNX-TV. In 1964, Porterfield became a news writer at Chicago CBS affiliate WBBM-TV Channel 2. Eventually, he co-anchored the WBBM-TV news and created the Emmy Award-winning shows Channel Two: The People and Two on Two. Someone You Should Know, his most popular series, aired in 1977 for the first time.

In 1985, Porterfield left WBBM and became a reporter for WLS-TV Channel 7, an ABC affiliate station in Chicago. He continues to produce the profile series Someone You Should Know. Porterfield has won numerous awards over the course of his television career, including 10 Emmy Awards, the Columbia DuPont Journalism Award, the Studs Terkel Award and the Operation PUSH Media Fairness Award. He is a member of the Jazz Institute of Chicago and plays violin in the Chicago Bar Association Orchestra-he earned a J.D. in 1993 from DePaul University School of Law. He and his wife, Marianita, have four children.

See how Harry Porterfield is related to other HistoryMakers
Donate Now
Click Here To Explore The Archive Today!