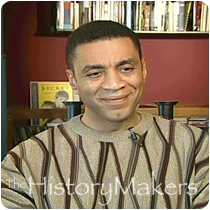 Favorite Color:
Burgundy, Gold
Favorite Food:
Italian, Japanese Food
Favorite Time of Year:
Fall
Favorite Vacation Spot:
Cancun, Mexico, Australia
Favorite Quote:
It Is Worth More To Have A Little Bit Of Something You Love, Than A Lot Of Something You Don't Care About.

Favorite Color:
Burgundy, Gold
Favorite Food:
Italian, Japanese Food
Favorite Time of Year:
Fall
Favorite Vacation Spot:
Cancun, Mexico, Australia
Favorite Quote:
It Is Worth More To Have A Little Bit Of Something You Love, Than A Lot Of Something You Don't Care About.

See how Harry J. Lennix is related to other HistoryMakers

Actor Harry J. Lennix was born the last of three children in Chicago, Illinois, on November 16, 1964, to Harry and Lillian Lennix. He grew up in Chicago’s South Shore neighborhood, the youngest of three siblings, and was raised by a single mother. His father died when Lennix was only two years old. Lennix attended Quigley Preparatory Seminary where he studied to become a Dominican priest. He did well in school, and upon graduation attended Northwestern University.

At Northwestern University, Lennix became interested in theater. He majored in acting and directing and was a member of For Members Only, an African American student organization at Northwestern. He was also awarded the School of Communications’ Sandra Singer Scholarship for talented theater students. After graduation, Lennix spent eight years teaching in Chicago Public Schools, although he began to perform in prominent Chicago theaters, including the Goodman and Steppenwolf Theatres.

Lennix's acting career began to take off in the late 1980s. His first film role was in 1989’s The Package, filmed on location in Chicago. Lennix continued working in theater, and the following year, he won an Obie award for his portrayal of Malcolm X in The Meeting. After relocating to New York City, Lennix performed in the play Titus Andronicus. He would reprise this role when the play became a film (Titus) in 1999. Lennix received both a Tree of Life Award from the NAACP and a Golden Satellite Award from the International Press Academy for his performance in that film. Lennix’s film and television credits are numerous. He has had significant roles in movies such as Ray, Love and Basketball, Get on the Bus, Barbershop 2: Back in Business and The Matrix: Revolutions, among others. His television credits included a major role on NBC’s acclaimed series Commander in Chief as well as parts in E.R., Diagnosis Murder and House, M.D..

Lennix is known for playing stern and stoic characters. He joined forces with Goodman Theatre director Chuck Smith to form Legacy Productions. The company has performed plays throughout the country. Although he resides in Los Angeles, Lennix is on the board of advisors at Chicago’s Goodman Theater, and continues to work as a stage actor, including a role in 2005 in the play Permanent Collection.

See how Harry J. Lennix is related to other HistoryMakers
Click Here To Explore The Archive Today!