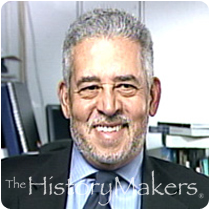 See how Harry G. Robinson, III is related to other HistoryMakers
Donate Now

After earning his bachelor’s degree, Robinson served in the Army, achieving the rank of First Lieutenant. He earned a Bronze Star and Purple Heart during his tour of duty in Vietnam. Robinson began his architectural career with the District of Columbia Redevelopment Land Agency as an architect and planner in 1968, where he remained until 1972. During that same time, he was a professor at the University of Washington, D.C., until 1974. Robinson also taught at Morgan State University from 1971 until 1979. In 1976, he founded and became the principal of the Robinson Group, an urban design consulting firm. In 1979, Robinson was named the dean of architecture and planning at Howard University, a position he held until 1995 when he was named vice president of the university. He remains there today as James E. Silcott Professor of Architecture and Dean Emeritus

Robinson is active in a wide variety of professional organizations. He is the founder of the African American Architect Initiative, vice chairman of the United States Commission on Fine Arts and a professional advisor to the National Underground Railroad Freedom Center. Robinson also serves on the board of directors of the Vietnam Veterans Memorial Fund. Robinson presided over an international competition in Dakar, Senegal, for urban planners and architects to design a cultural complex, the Goree Memorial, in 1995. Robinson and his wife, Dianne, have three children.

See how Harry G. Robinson, III is related to other HistoryMakers
Donate Now
Click Here To Explore The Archive Today!