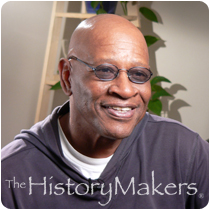 See how Harry Elston is related to other HistoryMakers
Donate Now

R&B singer Harry James Elston was born on November 4, 1938 in Dallas, Texas to the musical family of Ernestine Cooksey and Leonard David Elston, Sr. Elston grew up in San Diego, California and attended Midway Elementary School and Point Loma High School. Elston began his career in the music industry around the ages of sixteen or seventeen with the Johnny Otis Caravan. Elston and the group he was in, Cel Foster and The Audios, came to San Diego to a talent search. The group was chosen for the Johnny Otis Caravan, which included other musical acts like Etta James and Jacki Kelso. By age twenty-five, Elston began working as the limousine driver for The Temptations. In 1963, Elston formed a R&B group called the Hi Fi’s with Lamonte McLemore, Floyd Butler and ex-Miss California Bronze Talent Award winner, Marilyn McCoo. As a member of the Hi Fi’s, Elston sang at local night clubs while taking lessons from a vocal coach. The Hi Fi’s came to the attention of Ray Charles in 1964, and the following year, he decided to take the group on tour with him. Ray Charles went on to produce the group’s single “Lonesome Mood”. In 1966, due to internal disagreements, Elston and Floyd Butler decided to depart from the Hi Fi’s and along with Jessica Cleaves and Barbara Jean Love they formed the Friends of Distinction.

Originally, Elston came up with the name Distinctive Friends, but Barbara Jean Love decided to reverse the words. In 1968, Hall of Fame football player Jim Brown met the group and introduced them to the staff at RCA Records. In 1969, Friends of Distinction released their first album entitled Grazin’ on RCA Records. The album included the songs “Grazing in the Grass”, of which Elston wrote and sang lead on, and “Going in Circles.” Grazin’ peaked at number five on the R&B charts. “Going in Circles” preceded the album, and it landed at number three on the charts. Friends of Distinction also released the songs “Love or Let Me Be Lonely”, “Time Waits for No One” and “I Need You.” When Barbara Jean Love became pregnant in 1970, Charlene Gibson replaced the vocalist, and the Friends of Distinction released Real Friends on RCA Records. Another change in Friends of Distinction occurred when Jessica Cleaves decided to leave the group and joined the R&B group Earth, Wind and Fire.

During the 1960s, Elston was also a prominent figure in the urban night life. Alongside, Jim Brown and John Daniels, Elston was instrumental in opening the Mavericks Flat, a well-known L.A. night club that is often referred to as the Apollo Theater of the west coast. In addition, Elston was instrumental in the formation of the N.I.E.U. (Negro Industrial and Economic Union). In 1992, Elston was co-writer of “It’s Over,” a single for Friends of Distinction. The current members of the group are Dorian Holley, Wendy Smith Brune, Berlando Drake and Harry Elston.

Elston was interviewed by The HistoryMakers on November 6, 2007.

See how Harry Elston is related to other HistoryMakers
Donate Now
Click Here To Explore The Archive Today!