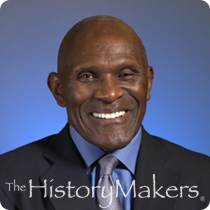 See how Harry Carson is related to other HistoryMakers

Football player Harry Carson was born on November 26, 1953 in Florence, South Carolina to Gladys Carson and Edgar Carson, Sr. He began playing football as a defensive end during his sophomore year at Wilson High School in Florence, where he also joined the Air Force Junior ROTC. In 1969, Carson transferred to the integrated McClenaghan High School, where he became a starting defensive end. Carson attended South Carolina State University in Orangeburg, South Carolina, where he was a four-year starter as a defensive lineman under Coach Willie Jeffries. Carson played a role in setting a college football record for the fewest points allowed in 1974. He graduated with his B.S. degree in education in 1976.

Carson was drafted by the New York Giants in the fourth round of the 1976 NFL draft. Under the tutelage of defensive coordinator Marty Schottenheimer, Carson was trained to play middle linebacker. He was named to the NFL’s All-Rookie Team in 1976, and selected to play in the Pro Bowl in 1978, the first of nine in his career. Under Bill Parcells, who became head coach in 1983, the Giants improved, making the playoffs in 1984 and 1985. During the 1986 season, the Giants led the league with a 14-2 record, and Carson served as team captain for the team during the Super Bowl XXI victory in 1987 against the Denver Broncos. Carson led the team in tackles for five years, and served as captain for ten years. He retired from professional football in 1988.

Carson was diagnosed with post-concussion syndrome in 1990, due to the head trauma sustained during his NFL career. He became a leading voice in speaking out for the rights and proper care of retired NFL players who suffer from diseases such as chronic traumatic encephalopathy (CTE). He released his autobiography, Captain for Life in 2011, and appeared in the documentary League of Denial: The NFL's Concussion Crisis in 2013. He was also active in healthcare organizations like Meridian Neuroscience Health System Inc., the Congress of Neurological Surgeons, and the Aplastic Anemia Foundation. Carson was inducted to the Pro Football Hall of Fame in 2006.

Harry Carson was interviewed by The HistoryMakers on September 1, 2016.

See how Harry Carson is related to other HistoryMakers
Click Here To Explore The Archive Today!