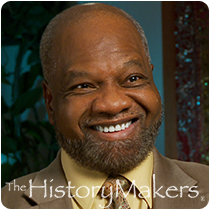 See how Harry Boomer is related to other HistoryMakers
Donate Now

Television broadcast journalist and radio personality Harry Boomer was born on September 4, 1953 in Turkey, North Carolina. He is the youngest of ten children born to George and Lucy Boomer. Upon graduating from high school, Boomer, the son of a Baptist minister, moved to Washington D.C. to pursue his interest in broadcast journalism. He studied at the Columbia School of Broadcasting, Northern Virginia Community College, and Cleveland State University.

In 1971, at the age of seventeen, Boomer was hired as an emcee at the Mark IV Supper Club in Washington D.C. He then worked on a number of different major radio stations in D.C. until 1988, when a family friend asked Boomer to come to Canton, Ohio to work as a program director at the WBXT AM/900 radio station. While still working at WBXT, Boomer began volunteering at the WUAB television station in Cleveland, Ohio. The station soon hired him as a reporter and over his more than twenty years of dedication Boomer was promoted to morning and noon co-anchor/reporter of 19 Action News at the WOIO television station (an affiliate of CBS). In addition to his work at both WUAB and WOIO, Boomer hosted and helped produce the program “InfOhio After Nine,” at the time Ohio’s first and only statewide public radio newscast; he served as an award-winning reporter/producer and assistant news director for WCPN, Cleveland Public Radio; and has been a regular guest on the Emmy-winning WVIZ Cleveland Public Television show Feagler and Friends.

In recognition of his achievements, Boomer was inducted into the Broadcasters Hall of Fame in 2007. He is also the recipient of a number of awards, including the Cleveland Communicators' award for best single hard news story, the Cleveland Communicators’ award for public affairs service program, the Ohio Educational Telecommunications’ award for public affairs and special news, the Excellence in Journalism award from the Press Club of Cleveland, and the Corporation for Public Broadcasting Fellowship award from the Multicultural Producers Forum.

Boomer has also been involved in many professional and civic organizations. He served as the president of the Cleveland chapter of the National Association of Black Journalists and has been a member of the board of directors for the Ohio Associated Press, the First Tee Cleveland, the Ohio Center for Broadcasting, and the North East Ohio Health Services.

Boomer lives in Cleveland, Ohio and often serves as keynote speaker and the master of ceremonies at community and college events. He has one daughter and two grandchildren.

Harry Boomer was interviewed by The HistoryMakers on February 10, 2014.

See how Harry Boomer is related to other HistoryMakers
Donate Now
Click Here To Explore The Archive Today!