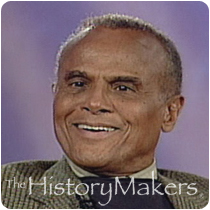 Born to immigrant parents in Harlem on March 1, 1927, Harry Belafonte spent much of his youth in his mother's home country of Jamaica. Though difficult, life in Jamaica was full of rich cultural experiences that influenced Belafonte's art.

At the beginning of World War II, Belafonte returned to Harlem with his mother and brother. He had trouble integrating into the new environment and later dropped out of high school to join the U.S. Navy. After Belafonte was honorably discharged, he went back to New York, where he worked odd jobs until two free tickets to the American Negro Theatre (A.N.T.) changed his life.

Belafonte auditioned for the A.N.T. and earned his first leading role in Juno and the Paycock. In 1953, he made his film debut opposite Dorothy Dandridge in Bright Road. He won a Tony in 1954 for his performance in Almanac. At the same time, Belafonte developed his singing talents, having parlayed a series of nightclub performances into a record contract. His third album, Calypso, topped the charts for thirty-one consecutive weeks and was the first record to sell more than 1 million copies. Belafonte also secured a television outlet with his hour-long special, Tonight with Belafonte, which won him an Emmy. He became the first African American TV producer and his company, HarBel, went on to produce one Emmy nominee after another.

In the early 1950s, Belafonte developed a strong relationship with Dr. Martin Luther King, Jr. Belafonte worked tirelessly to mobilize artists in support of the civil rights movement. In 1985, he again rallied the global artistic community to raise awareness of the famines, wars and droughts plaguing many African nations. USA for Africa raised more than $60 million for this cause with "We Are the World" and Hands Across America. A longtime anti-apartheid activist, Belafonte hosted former South African President Nelson Mandela on his triumphant visit to the United States. Belafonte has maintained his commitment to service as a UNICEF goodwill ambassador.