Information about Harrison B. Wilson 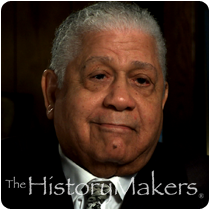 See how Harrison B. Wilson is related to other HistoryMakers
Donate Now

University President and College Basketball Coach Harrison B. Wilson was born on April 21, 1925 and is a native of Amsterdam, New York. Wilson is the fifth of seven siblings. His mother was a school teacher and his father worked in construction. Wilson served in the United States Navy from 1945 until 1947, when he enrolled at Kentucky State University at the age of nineteen. There he received his B.S. degree, was an honor student and a star athlete in basketball, football, baseball and track.

In the early 1950s Wilson received his M.A. degree and his D.H.S. in health science and administration from Indiana University. Between the ages of twenty-three and thirty-nine, Wilson worked as a professor, administrator and coach at Jackson State College (now Jackson State University). Wilson was the head basketball coach from 1951 to 1960. He then became chairman of the Department of Health and Physical Education from 1960 until 1967. Additionally, he became chairman and professor of health and physical education at Tennessee State University in Nashville, Tennessee that same year as well. Wilson then briefly worked at Fisk University as the assistant to the President of Fisk before being named President of Norfolk State University in 1975. During Wilson’s term at Norfolk, which spanned over three decades from 1975 until 1997, Norfolk State University’s annual budget increased from $14 million to $86 million, enrollment increased from 6,700 students to 8,100 students, and the number of faculty and staff has grown from 377 to 412, with a student-faculty ratio of twenty-two-one. The University also added fourteen new buildings and acquired fifty-one acres of land during Wilson’s tenure.

Upon his retirement in 1997, Wilson was honored by Old Dominion University as one of their Strong Men and Women Excellence in Leadership series. Wilson is active in a number of boards and organizations, including the board of directors of Virginia National Bank, the lay advisory board of DePaul Hospital, the Virginia State Advanced Council on Vocational Education, and the board of directors of the Virginia Health, Welfare, and Recreation Planning Council. Wilson is also a member of the Alpha Kappa Mu fraternity.

Wilson is married to Dr. Lucy Wilson, and he is the father of six children.

Harrison B. Wilson was interviewed by The HistoryMakers on May 11, 2010.

See how Harrison B. Wilson is related to other HistoryMakers
Donate Now
Click Here To Explore The Archive Today!