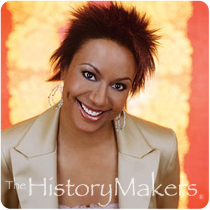 "See God In Each Other."

Author and writer Harriette Cole was born on March 14, 1961 in Baltimore, Maryland. Her mother, Doris Freeland Cole, was an educator, and her father was the Honorable Harry A. Cole, Maryland’s first African American Republican Assistant Attorney General and its elected State Senator and judge appointed to the Maryland’s Court of Appeals.

While at Howard University, Cole worked in retail and as a model. She participated in the Congressional Black Caucus fashion show which began her successful runway modeling career. Unsure of her career track, Cole first worked as a secretary on Capitol Hill after graduation. In late 1983, Cole left Washington, D.C. to accept a position at Essence magazine. During her eleven year tenure there, she held the positions of fashion director and lifestyle editor. Cole served as the founding editorial director of Uptown magazine and the editor of American Legacy Woman magazine.

In 1993, Cole wrote her first book, Jumping the Broom: The African American Wedding Planner, which is in its second edition. Cole has appeared on many national television and radio programs and in many major magazines and newspapers. She is a contributor to NBC’s Today Show.

Cole is a nationally syndicated columnist of “Sense and Sensitivity,” an etiquette and relationship management advice column targeting diverse audiences. Cole is also a bestselling author of seven books including How to Be: A Guide to Living with Grace and Integrity as well as the preeminent African-American Wedding Planner, Jumping the Broom and its sequel Vows, and 108 stitches: Words We Live By. Cole serves on the Metropolitan Museum of Art’s Multicultural Audience Development Initiative.

During her tenure as creative director of Ebony magazine and then the added responsibility of editor in chief, Cole produced groundbreaking covers and features on President Obama, Michelle Obama, Michael Jackson and Prince. Cole co-executive produced a television special about the entertainer Prince that aired on The Africa Channel and was nominated for an NAACP Award.

Cole is married to fashion photographer George Chinsee, and they have one daughter.

Harriette Cole was interviewed by The HistoryMakers on November 7, 2006.