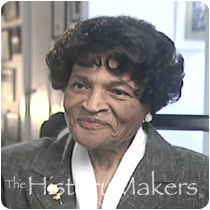 See how Harriett G. Jenkins is related to other HistoryMakers

Harriet Elizabeth Jenkins was born on July 26, 1926 in Forth Worth, Texas. She and her sister were raised by an aunt and uncle after the death of both her parents before she was ten years old. At he age of fourteen, in 1941, she graduated from I.M. Terrill High School and received a full scholarship to Fisk University in Nashville, Tennessee.

She attended Fisk from 1941 until 1945, where she earned her bachelor's of arts degree in mathematics. In 1945, she left Nashville and joined her sister in California, where she worked in a clerical position at Pacific Overseas Air Service Command until 1948.

There, Jenkins worked as a writer for Golden State Insurance Company and an Identification clerk for the Oakland Police Department from 1948 until 1954. Leaving there, she began her teaching career in the Berkeley, California school system. She quickly rose through the ranks, serving as the city's first Black female vice-principal. In 1957, she earned her master's degree in education from the University of California at Berkeley. She went on to become a school principal, director of elementary education and assistant superintendent of schools. In 1974, Jenkins left Berkeley and moved to Washington, D.C. to be with her husband.

From 1974 until 1992, Jenkins worked as the assistant administrator for equal opportunity programs at the National Aeronautics and Space Administration (NASA). During her nearly twenty-year tenure at NASA, she was responsible for implementing several programs that assisted minorities and women, including recruiting some of the agency's first African American astronauts. Her efforts extended beyond the astronaut program and included providing more opportunities for minorities in NASA's procurement contracts and research efforts. Under her leadership, university research centers were started and supported in Historically Black Colleges. In 1984, she earned her law degree from Georgetown University.

From 1992 until 1996, she worked with the U.S. Congress and served as the director at the Office of Senate Fair Employment Practices in the U.S. Senate. Her duties included ensuring the requirements of the Civil Rights Act of 1991 were administered for all Senate employees and the Capitol Police. Jenkins also assisted Senate staffs in implementation of the Family and Medical Leave Act of 1993.

Jenkins retired from the federal government in 1996. In 2000, NASA established a fellowship program in her name, awarding doctoral fellowships to qualifying minority students. She was the recipient of numerous awards and honors including placing her retirement in the Congressional Record.

See how Harriett G. Jenkins is related to other HistoryMakers
Click Here To Explore The Archive Today!