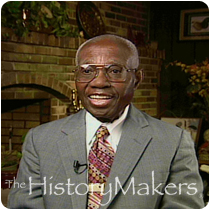 Favorite Color:
Red
Favorite Quote:
He Who Has, More Shall Be Added Unto It. He Who Has Not, That He Seem To Have Had Shall Be Taken Away.

Favorite Color:
Red
Favorite Quote:
He Who Has, More Shall Be Added Unto It. He Who Has Not, That He Seem To Have Had Shall Be Taken Away.

See how Harrell Spruill is related to other HistoryMakers

Philanthropist and educator Harrell Solomon Spruill has established programs to help young people build vocational skills for a successful life path. Spruill was born in Travis, North Carolina on August 18, 1924, to Solomon, a farmer and Georgiana, a homemaker. Spruill and his nine siblings grew up on a thirteen acre farm which his father owned. Growing up, Spruill was painfully shy and throughout his youth Spruill’s closest friends were his siblings.

Spruill graduated from Tyrell County Training School in Columbia, North Carolina in 1940. Inspired by his sister’s college degree, Spruill was determined to attend the Hampton Institute. After high school, Spruill deferred for a year to work in a wood mill to raise money for tuition. Spruill also had a work study position, and though he was thankful to have the opportunity, he longed to be a “regular” college student. In 1943, he was drafted into the U.S. Navy where he worked as a diesel mechanic and rose to the rank of Fireman First Class and Motor Machinist Second Class. Though he saw no combat, Spruill was incredibly successful in the Navy because it allowed him to practice the values his parents instilled in him, that of education and hard work.

Following his time in the service, Spruill returned to Hampton more self assured and eager to become involved with extra-curricular activities. He joined the Omicron Social Club, and was a two time division-champion wrestler. In 1949, Spruill received his certificate in the automobile and diesel mechanics program. After returning from a training program in Chicago, Spruill saw the disrepair the farm had fallen into since his father’s death and stayed to return the farm back functional. He received his B.S. degree from Hampton in 1952. That same year, Spruill taught at Alcorn University in Mississippi. He remained there for two years. Later, he took a position at Wiley H. Bates High School in Annapolis, Maryland, where he taught industrial arts in the Anne Arundel County school system for twenty-nine years.

In 1956, under the advisement of a close friend, Spruill bought fifteen acres of land. To make his loan payments on a teacher’s salary, Spruill lived in boarding houses and cooked his own meals. Another example of his resourcefulness, Spruill had his students serviced neighborhood cars to raise funds for classroom supplies. In 1987, the State of Maryland bought his land to build a new road. With the profit from the sale, Spruill and his siblings established a scholarship in their parents’ names. The following year, Spruill bought another piece of land on Tracy’s Landing, so he could run farm programs for inner city school children. With the land that he purchased, he formed partnerships with the Boys and Girls Club and African American fraternities to use his surplus crops for fundraisers. Spruill started the Har-Pearl Foundation in 2003. Co-named after his late wife of thirty-two years, Pearl, the organization donates to various causes. Spruill is married to Annetta Spruill, and they reside on the farm at Tracy’s Landing. He has two children with Pearl: Kevin and Kecia; three grandchildren: Sarah Spruill, Jazlyn and Myles Johnson; and one step-son: Jay Pittman (Annetta’s son).

Spruill was interviewed by The HistoryMakers on July 26, 2008.

Harrell Spruill passed away on December 6, 2012.

See how Harrell Spruill is related to other HistoryMakers
Click Here To Explore The Archive Today!