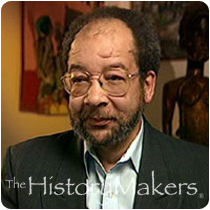 See how Harold Rogers is related to other HistoryMakers
Donate Now

Distinguished professor and international activist Harold Rogers was born on December 25, 1942, in Cleveland. He attended John Adams High School in Cleveland before completing a B.A. at Kent State University in 1967. Rogers went on to study at the University of Chicago and earned his M.A. in 1973.

Rogers began his career in education at Antioch College, where he taught in the early 1970s. From 1972 to 1993, he was the Chicago spokesperson for the African National Congress of South Africa. In 1973, he joined the faculty of the City Colleges of Chicago, where he has served as the chairman of the African American Studies Department for Olive-Harvey College since 1980. Rogers served as a labor adviser for the state of Illinois for a number of years; and, from 1987 to 1992, he worked as the district administrator for Congressman Charles Hayes. He was also instrumental in bringing Nelson Mandela to Chicago in 1993 and helped raise funds for Mandela’s election the following April. Rogers participated in the U.S. delegation to South Africa’s first democratic elections in 1994. His areas of expertise included global trade and economics, multiculturalism in education, African history and African American history.

Rogers was an active member of the Black Panther Party, the NAACP and Operation PUSH. In 1975, he joined the board of the Coalition of Black Trade Unionists. Recognized nationally for his gifts as an educator, Rogers has been president of Black Faculty in Higher Education since 1980, a member of President Bill Clinton’s Committee on Higher Education, and a National Advisory Board member for the W.E.B. Du Bois Foundation since 1990. He presided over the African American Studies Program that conducts educational trips to Africa and Cuba since its inception in 1980. He has also served on numerous boards including the Jazz Institute of Chicago and The Vivian G. Harsh Collections. Rogers received an honorary degree from Oxford University in 2008.

Harold Rogers was interviewed by The HistoryMakers on April 7, 2003.

See how Harold Rogers is related to other HistoryMakers
Donate Now
Click Here To Explore The Archive Today!