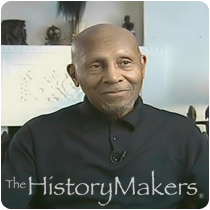 See how Harold Pates is related to other HistoryMakers
Donate Now

Educator and cultural activist Harold Pates was born October 31, 1931, in Macon, Mississippi. His great aunt, raised in slavery, lost two fingers to her master for attempting to read. Pates’ parents, Amanda Beasley Pates and Squire Pates were graduates of Bolivar Training School in Mound Bayou, Mississsippi. Migrating to Chicago, Illinois, Pates attended Forestville Elementary School and DuSable High School graduating in 1948. Taught music by DuSable’s Captain Walter Dyett, Pates played with Eddie Harris, Richard Davis, John Gilmore, Jimmy Ellis and other future greats. Pates graduated from Wilson Junior College in 1952 and DePaul University with his B.A. degree in English in 1954. He earned his M.A. degree from DePaul in 1956 and received his PhD degree from the University of Chicago in 1976.

Pates taught at Fuller Elementary School and Forestville Elementary School, and was assistant principal of DuSable Upper Grade Center from 1964 to 1968. He served as a counselor at DuSable Upper Grade Center and High School and as a guidance counselor for the Hyde Park Evening School. As teacher and administrator, Pates joined Lawrence Landry, Lu and Jorja Palmer, Rev. C.T. Vivian, Lorenzo Martin, Bobby E. Wright, and others in agitating for African American concerns in the Chicago Public Schools. In 1968, he joined Loop College where he became director of the Admissions Department. Pates also taught at Loyola University, George Williams College, Northeastern Illinois University, and Concordia College. He also helped plan the first Upward Bound Program. Appointed dean of career programs at Malcolm X College in 1981, Pates moved on to Kennedy-King College as a dean in 1983. In 1986, Pates was named president of Kennedy-King College, serving until 1997. At Kennedy-King, he provided access for cultural and civic organizations and events at an unprecedented level.

Active in efforts to generate an African version of the history and culture of Africa and to infuse the black experience into the educational system, Pates was a founder of the Chicago Communiversity and the Association of African Educators with Anderson Thompson in the late 1960s. He was a founding member of the Kemetic Institute, the Association of Black Psychologists, the National Association of Black School Educators, the Black United Front, the Chicago Task Force for Black Political Empowerment, the Association for the Study of Classical African Civilizations, and the Harold Washington Institute. Recipient of numerous awards, ranging from the Chancellors Award for outstanding Leadership to the Muntu Dance Theatre’s Alyo Award, Pates currently serves on the board of the Black United Fund of Illinois and the advisory board of the Jacob H. Carruthers Center for Inner City Studies of Northeastern Illinois University. He is founding director of the All African World Virtual University. Fit, playing full court basketball into his 70s, Pates, now retired, enjoys golf and playing jazz on the cornet.

A widower, Pates has a grown daughter and son.

See how Harold Pates is related to other HistoryMakers
Donate Now
Click Here To Explore The Archive Today!