Information about Harold A. Dawson, Sr. 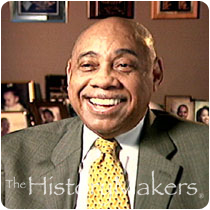 Favorite Food:
Chicken
Favorite Time of Year:
Spring
Favorite Vacation Spot:
Islands
Favorite Quote:
Do Something Even If It's Wrong.

Favorite Food:
Chicken
Favorite Time of Year:
Spring
Favorite Vacation Spot:
Islands
Favorite Quote:
Do Something Even If It's Wrong.

See how Harold A. Dawson, Sr. is related to other HistoryMakers
Donate Now

Real estate tycoon Harold A. Dawson, Sr., was born in Atlanta, Georgia on March 5, 1935. While still in grade school, Dawson began working, polishing brass and washing windows for money. After graduating from Booker T. Washington High School in 1953, he went on to attend Morehouse College. However, a personal crisis in 1955 forced him to leave school early. In 1957, he was hired by T.M. Alexander, Sr. of Citizen’s Trust Bank as a realtor, and later went over to Alexander’s firm, Alexander & Associates, the most prestigious African American owned real estate firm at the time. but he returned, earning his B.S. degree in business administration in 1963.

Alexander & Associates later became Alexander-Dawson & Associates, where Dawson served as president. Under his guidance, Alexander-Dawson & Associates built the University Plaza Apartments, the first luxury mid-rise building in Atlanta’s black community. The firm also bought and developed properties behind the “Peyton Wall,” the controversial wall built in an attempt to separate Atlanta’s black and white communities. In 1969, he formed the Harold A. Dawson Company (HADCO), where he remains today as CEO.

HADCO has grown from its early years of selling homes in the Atlanta area to developing multi-million dollar properties across the United States. Some of the recent accomplishments of the company include Centennial Hill in Atlanta, which houses the Children’s Museum of Atlanta and a high-rise condominium building, and Centerpoint in Baltimore, which occupies a full city block for commercial and residential use. HADCO has remained a strong family business. When Dawson was diagnosed with cancer in 1992, his son, Harold Dawson, Jr., returned to Atlanta to join the business.

A firm believer in giving back to his community, Dawson has set up a family foundation to fund a new building for Radcliffe Presbyterian Church, as well as scholarships for students who attend the church. He has also established scholarships for students attending Morehouse and Clark Atlanta Universities. Dawson holds the distinction of being the first African American to serve on the Georgia Real Estate Commission, where he is the former chairman and also a member. He is the past president of the National Association of Real Estate License Law Officials, the Empire Board of Realtists and the National Association of Real Estate Brokers.

In addition to his son, Dawson and his wife, Rose, have a daughter, Cari.

See how Harold A. Dawson, Sr. is related to other HistoryMakers
Donate Now
Click Here To Explore The Archive Today!