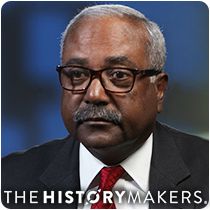 Corporate executive Hansel E. Tookes II was born on December 11, 1947 in the Bronx, New York to Leona Washington Tookes and Hansel E. “Tootie” Tookes. Tookes’ father was an associate professor of health and physical education at Florida Agricultural and Mechanical University. Tookes earned his B.S. degree in physics from Florida State University in 1969, and received his M.S. degree in aeronautical systems from the University of West Florida in 1971.

Following his graduation from the University of West Florida, Tookes enlisted in the United States Navy. He reached the rank of lieutenant commander and piloted Lockheed P-3 Orions during his military career. Tookes was discharged from the Navy in 1977 and became a pilot for United Airlines. In 1980, Tookes joined Norden Systems, Inc. While working at Norden Systems, Tookes was named as contract project director with the U.S. Navy in 1988. The contract was for a new radar system for the McDonnell Douglas/General Dynamics A-12 Avenger II advanced tactical aircraft. He remained with Norden Systems until 1989, when he accepted a position as vice president of business planning at Hamilton Sunstrand. Tookes later became vice president of support systems at Hamilton Sunstrand, which placed him in charge of customer support for all of the company’s aircraft products. In 1997, Tookes became president of Pratt and Whitney’s government engines division. He joined Raytheon Aircraft Company as president and chief operating officer in 1999. Only a year later, Tookes became chairman and chief executive officer of Raytheon. He retired from Raytheon International, Inc. in 2001.

Tookes served as a board member for Harris Information Technology Services, Inc., FPL Group, Inc., Waypoint Aeronautical Corporation, and Florida State University. Tookes served as a director for Corning, Inc. beginning in 2001, for Ryder System, Inc. since 2002, and for NextEra Energy, Inc. starting in 2005. He also served on the board of directors for the Harris Corporation beginning in 2005. Tookes was the chairperson for the corporation’s governance and corporate responsibility committee in 2001.

Hansel E. Tookes II was interviewed by The HistoryMakers on August 21, 2017.