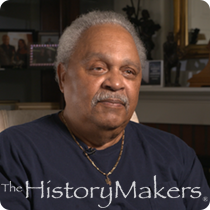 See how Hank Dixon is related to other HistoryMakers

Singer Hank Dixon was born on December 17, 1939 in Detroit, Michigan to Melvia Thomas Dixon and George Dixon, Sr. As children, Dixon and his ten siblings performed at the nightly services of the Metropolitan Church of God in Detroit. Dixon began his education at Detroit’s George Washington Carver School. Following his enlistment in the U.S. Army in the late 1950s, Dixon completed his basic training at Fort Leonard Wood in Missouri; and then he served as a bridge engineering specialist in Karlsruhe, Germany.

Dixon was discharged from the Army in 1965. Around this time, Dixon founded The Originals with baritone Walter Gaines, bass singer Freddie Gorman and lead tenor C.P. Spencer. The group first served as the male background vocalists for artists like Stevie Wonder and David Ruffin at the Motown Records studios in Detroit. In 1969, the group released their debut album, Green Grow the Lilacs, on Soul Records, a subsidiary label of Motown Records. The album featured the song Baby, I’m for Real written by Marvin Gaye. Once the track became a commercial success, the album was reissued under the title Baby, I’m for Real. Gaye also wrote The Originals’ next hit single, ‘The Bells,’ in 1970. The Originals went on to tour with The Temptations; and they performed at the Apollo Theater in New York City. In 1975, The Originals moved to Los Angeles, California, where they recorded the album Down to Love Town. They became a regular guest on the Art Laboe Connection radio program, and were also featured on the television show, Soul Train. The Originals left Motown Records in 1977; and recorded albums with Columbia Records and Motorcity Records. In 1980, Dixon became a bus driver for the Los Angeles County Metropolitan Transportation Authority, retiring in 2004. He and his daughter, Terrie Dixon, re-established The Originals in the mid-2000s; and they went on to tour with Defrantz Forrest and Dillon F. Gorman, the son of Freddie Gorman.

Hank Dixon was interviewed by The HistoryMakers on July 20, 2017.

See how Hank Dixon is related to other HistoryMakers
Click Here To Explore The Archive Today!