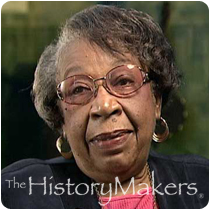 Favorite Color:
Green
Favorite Food:
Fried Chicken, Cabbage, Greens, Cornbread
Favorite Time of Year:
Fall
Favorite Vacation Spot:
Arizona, Colorado
Favorite Quote:
I Shall Pass This Way But Once. If You Know Your Roots, It Holds You Steadfast Like A Tree.

Favorite Color:
Green
Favorite Food:
Fried Chicken, Cabbage, Greens, Cornbread
Favorite Time of Year:
Fall
Favorite Vacation Spot:
Arizona, Colorado
Favorite Quote:
I Shall Pass This Way But Once. If You Know Your Roots, It Holds You Steadfast Like A Tree.

See how Hana Stith is related to other HistoryMakers
Donate Now

Hana Stith was born on August 25, 1928 in Fort Wayne, Indiana. She spent 36 years teaching there, mostly in inner city schools where she felt her skills were most needed. She earned respect for her teaching skills and her compassion for children.

Stith joined the junior branch of the NAACP before graduating from Central High School in 1946. She received a scholarship from the Fourth District Lay Organization of the African Methodist Episcopal Church and used it to attend religiously affiliated Wilberforce College in Wilberforce, Ohio, the first institution of higher education owned and operated by African Americans. A dispute between church and state caused Wilberforce to temporarily lose its accreditation and Stith finished her education at St. Francis College. She earned both her bachelor's and master's degrees there and was certified by Purdue University in guidance and counseling.

When Stith became a teacher in 1960, she was one of the first African Americans hired in the Fort Wayne Community Schools. She spent 22 years as a classroom teacher and then became a Title I teacher, instructing students who needed individual attention in reading and math. She retired from teaching in 1996 and became a docent for the Lincoln Museum as well as a board member of the local NAACP chapter. She co-founded the African/African American Historical Society in 1998. In 1999, she found a home for the African/African American Historical Museum in Fort Wayne, Indiana. After the museum opened on February 1, 2000, it soon became recognized as the premier museum of African American history in Indiana. She serves as president of the society and curator of the museum.

Stith has taken an active role in the affairs of her community. She was an original member of the Fair Housing Group and an early member of the Panel of American Women. As the first female appointed to the Fort Wayne Redevelopment Commission, she served twelve years under four mayors and set a record for serving longer than anyone else. She also was appointed to the Metropolitan Human Relations Commission, serving four years, and the Fort Wayne Board of Safety, serving six years. As a member of the Turner Chapel A.M.E. Church, she was the director of the Commission on Christian Education. She taught Sunday school for 17 years and organized the church's first vacation Bible school.

See how Hana Stith is related to other HistoryMakers
Donate Now
Click Here To Explore The Archive Today!