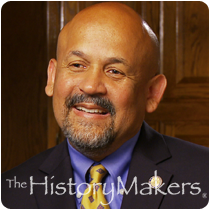 See how Hamilton Cloud, II is related to other HistoryMakers

Television producer and talent agent Hamilton Cloud, II, was born on November 30, 1952, in Los Angeles, California. His father, Hamilton Cloud, Sr. was one of a few African Americans trained at the Northwestern University Dental School at the time of his graduation. Cloud grew up in Los Angeles but pursued his education at Yale University, where he earned his B.A. degree for his studies in “Communications: Mass Media and Black America,” a concentration that he originated.

Working with radio programs in Los Angeles for fifteen years, Cloud established himself within the media industry. His interests then turned to television programming, producing children’s and public affairs programs. In 1978, Cloud joined the network programming department at the National Broadcasting Company (NBC), and he became the vice president of Current Comedy Programs in 1982. In this role, he supervised the weekly production of a number of well-known comedy series, including Cheers and Family Ties. Cloud began his work in producing the NAACP Image Awards in 1987. The 19th Annual NAACP Image Awards, when broadcasted on NBC, marked the first time the show was aired on a national television network. Cloud served as the producer of the annual show for fourteen more years.

In 1990, Cloud supervised and developed programming for Playboy Entertainment Group’s cable, home video and television divisions. Within three years, he was chosen serve as the vice president of Quincy Jones/David Salzman Entertainment (QDE), supervising first-run television, special events and interactive programming. After creating Thundercloud Productions in 1995, Cloud became the senior vice-president of Letnom Productions the following year. He continued to produce television shows such as The Montel Williams Show and events like Game of the Century, a baseball event to recognize the legacy of the Negro Baseball Leagues.

Cloud has served on a number of boards, including the Hall of Fame and the Prime Time Emmy Award Committees of the Academy of Television Arts and Sciences. He has also been a member of the WGA and The Caucus of Producers, Writers and Directors.

Cloud is married to Fukue Yamaguchi. The couple has one daughter.

Hamilton Cloud was interviewed by The HistoryMakers on April 29, 2011.

See how Hamilton Cloud, II is related to other HistoryMakers
Click Here To Explore The Archive Today!