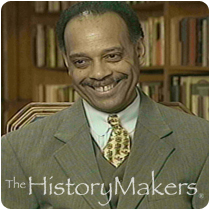 See how Haki Madhubuti is related to other HistoryMakers
Donate Now

Poet, essayist, and entrepreneur Haki Madhubuti embodies the true spirit of a renaissance man as he moves seamlessly through the worlds of literature, business and education. Born in Detroit, Michigan and moving to Chicago after his mother’s death, Madhubuti would sow the seeds that later led to his success. After graduation from high school, Madhubuti (known then as Don Lee) was drafted into military service, where he used books as his escape. After his tour of duty, he returned to Chicago and immersed himself in the black arts world.

Madhubuti became apprentice and curator at the DuSable Museum of African History in 1963 and worked closely with Margaret Burroughs, a scholar of pan-African history. During the four years he spent at the museum with Burroughs, Madhubuti met some of the most prominent forces in the African American arts community, including Gwendolyn Brooks, who encouraged him to publish a collection of his poetry. The result, Think Black, appeared in 1966 and was entirely self-published and distributed. After selling several hundred copies of Think Black within a week, Madhubuti realized that the dream of independent publishing -- free from established corporate interests -- could be attained. The following year, Madhubuti and two partners launched the Third World Press in the basement of his Chicago apartment with $400 and a mimeograph machine. In this humble setting, an institution was born.

Among the distinguished authors who Third World Press has published are celebrated playwright and essayist Amiri Baraka, scholar Chancellor Williams and renowned poet Gwendolyn Brooks, who has published the second volume of her autobiography and several books of poetry with the independent press. Among Madhubuti’s own writings to emerge from Third World are Black Men: Obsolete, Single, Dangerous?: The African American Family In Transition (1990); Claiming Earth (1994); GroundWorks (1996); and HeartLove: Wedding and Love Poems (1998). One of the many extraordinary aspects of Madhubuti’s career is that he has published more than twenty-two books of essays and poetry and has become one of the most prominent African American authors of his time without having ever relied on a larger, more-established publishing company.

Madhubuti serves as the director of the Gwendolyn Brooks Center at Chicago State University, which hosts the annual National Black Writers Conference. He and his wife, Safisha, are the founders of the Institute of Positive Education/New Concept School, a Chicago-based grade school that promotes an Afrocentric curriculum. Madhubuti is the recipient of fellowships from both the National Endowment for the Arts and the National Endowment for the Humanities. In 1984 he was presented with the Distinguished Writers Award from the Middle Atlantic Writers Association. He is also the 1993 recipient of the Paul Robeson Award from the African-American Arts Alliance.

See how Haki Madhubuti is related to other HistoryMakers
Donate Now
Click Here To Explore The Archive Today! 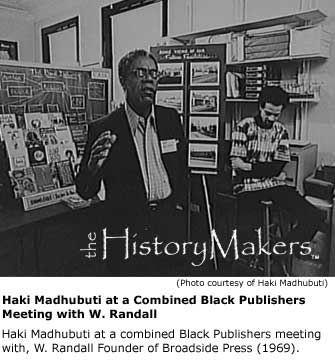 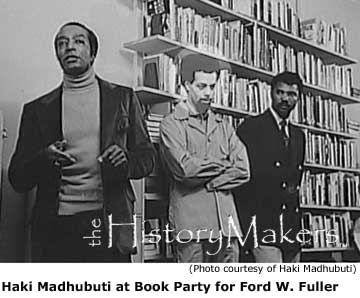