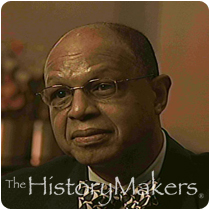 See how H. Melvin Ming is related to other HistoryMakers

Corporate media executive H. Melvin Ming was born Hilton Austin Melvin Ming in Hamilton, Bermuda. He is one of three sons of Hester and Calvin Ming. After completing his early education in Bermuda, Ming moved to the United States and graduated with his B.A. degree from Temple University in Philadelphia, Pennsylvania in 1967.

Upon graduation, Ming was hired as an Auditor and Certified Public Accountant (CPA) for the accounting firm Coopers Lybrand (PricewaterhouseCoopers) in Philadelphia and Washington, D.C. In 1973, at the age of twenty-nine, Ming became only the seventh African American to achieve professional standing as a CPA in Pennsylvania. After a successful twelve year tenure at Coopers Lybrand, Ming left to become the Assistant Director for East of the River Health Association, a primary care Community Health Center in Southeast Washington, D.C. Ming then served for two years as Vice President, Finance and Administration, for the National Urban Coalition, an urban policy analysis research non-profit corporation. He then led a successful financial turn-around of National Public Radio (NPR) in Washington, D.C. Ming went on to lead three more major financial restructurings at Channel Thirteen/WNET in New York, WQED in Pittsburgh and the Museum of Television and Radio in New York and Los Angeles. In 1999, Ming became the Executive Vice President and Chief Financial Officer of Sesame Workshop in New York, the creators of the popular children’s television show Sesame Street. In 2002, Ming became Chief Operating Officer at Sesame Workshop. In 2006, Ming became the Director of Westwood, Inc., the largest independent producer and distributor of programming for commercial radio in the nation.

Ming serves on boards including the trustee of Regional Conferences Retirement Board, where he serves as one of three outside directors overseeing the $94 million retirement fund; First Children Finance, a non-profit organization created to meet the growing demand for quality early care and education, especially in low-income communities; and Atlantic Union College, a liberal arts college of 600 students located in South Lancaster, Massachusetts.

Ming was interviewed by The HistoryMakers on February 6, 2008.

See how H. Melvin Ming is related to other HistoryMakers
Click Here To Explore The Archive Today!