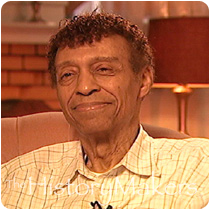 See how H. Leslie Adams is related to other HistoryMakers

Composer, pianist, educator and arts advocate H. Leslie Adams, was born in Cleveland, Ohio on December 30, 1932. Adams attended the Cleveland public schools and graduated from Glenville High School. He studied voice, piano, and composition at the Oberlin College Conservatory of Music, where he earned his bachelor’s of music degree in 1955. He went on to earn a master’s degree in music from the California State University at Long Beach in 1967 and his Ph.D. from The Ohio State University in 1973. He also completed additional studies in composition with Edward Mattila, Eugene O’Brien, and Marcel Dick from 1978 to 1983.

Adams has worked as piano accompanist for ballet and other dance companies and choral music ensembles. He served as the associate musical director at Cleveland’s Karamu House from 1964 to 1965 and became the musical director for the Kaleidoscope Players in Ration, New Mexico in 1967. Adams later returned to Karamu House as their composer in residence in 1979 and then served as guest composer at Cuyahoga Community College in 1980. He then served as composer-in-residence at the Cleveland Music School Settlement from 1981 to 1982, and was the founder and president of Accord Associates, Inc. for six years beginning in 1980, and the executive vice-president and composer-in-residence for Accord from 1986 to 1992. He has served as the president and artist-in-residence for Creative Arts, Inc. since 1997.

Adams held teaching positions at Soehl Junior High School, Linden, N.J., in the secondary schools of Raton, New Mexico, Florida A & M University, and at the University of Kansas at Lawrence. He is the recipient of numerous commissions, including those from the Ohio Chamber Orchestra, the Cleveland Chamber Symphony, the University of Kansas, and the Cleveland Symphony Orchestra. He is the recipient of honors and awards from the National Association of Negro Women, the National Endowment for the Arts, the Cleveland Foundation and the Jennings Foundation, among others.

He holds life memberships in Phi Kappa Phi, Phi Mu Alpha Sinfonia, Phi Delta Kappa, Pi Kappa Lambda, the American Choral Directors Association, and the American Guild of Organists. He has also served on the Advisory Council of the Musical Arts Association of the Cleveland Orchestra.

H. Leslie Adams was interviewed by The HistoryMakers on June 17, 2004.

See how H. Leslie Adams is related to other HistoryMakers
Click Here To Explore The Archive Today!