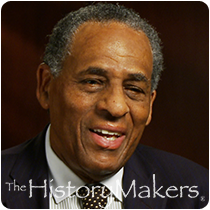 See how H. Carl McCall is related to other HistoryMakers

Government official and civic leader H. Carl McCall was born on October 17, 1935 in Boston, Massachusetts to Herman McCall and Caroleasa Ray. He and his five siblings were raised in Boston’s Roxbury community. In 1954, McCall graduated from Roxbury Memorial High School, where he was president of his class. He received his B.A. degree in government from Dartmouth College in 1958, and went on to attend the University of Edinburgh in the United Kingdom. He also received his M.Div. degree from Andover Newton Theological Seminary and became an ordained minister in the United Church of Christ.

McCall worked first as a high school teacher and a bank manager, and then joined the United States Army in the 1960s. By the late 1960s, he moved to New York City to work for church outreach and was subsequently appointed by Mayor John Lindsay to head the Commission Against Poverty. In 1971, McCall helped to found and served as president of the Inner City Broadcasting Corporation. He was then elected to the New York State Senate representing the upper Manhattan district of New York City in 1975, and went on to serve three terms. In 1979, McCall was appointed as an ambassador for the U.S. delegation to the United Nations by President Jimmy Carter. He unsuccessfully ran for Lieutenant Governor in 1982, but was named the state’s commissioner of human rights by Mario Cuomo in 1983. McCall then served as vice president of Citicorp from 1985 to 1993, and from 1991 to 1993, he served as president of the New York City Board of Education under Mayor David N. Dinkins.

In 1993, McCall became the first African American elected as the New York State comptroller after winning a special election. He was reelected to the position in 1994 and in 1998. McCall then ran for and won the Democratic primary for Governor of New York in 2002, but was defeated in the general election. He stepped down from his post as comptroller in 2003, and later started a financial services firm called Convent Capital.

McCall was a member of the board of the New York Stock Exchange from 1999 to 2003. He also sat on the board of the Apollo Theater Foundation, Inc., and is a member of the Fiscal Control Board for Buffalo, New York. He has also served on the boards of directors for TYCO International, New Plan Realty, TAG Entertainment Corporation, Ariel Investments, and as chair of the New York State Public Higher Education Conference Board. In 2011, McCall was appointed chairman of the State University of New York Board of Trustees. He is the recipient of nine honorary degrees and was awarded the Nelson Rockefeller Distinguished Public Service Award from the Rockefeller College of Public Affairs and Policy at the University of Albany in 2003.

McCall is married to Dr. Joyce F. Brown, the president of the Fashion Institute of Technology in New York. He has one daughter, Marci.

Carl McCall was interviewed by The HistoryMakers on June 18, 2014.

See how H. Carl McCall is related to other HistoryMakers
Click Here To Explore The Archive Today!