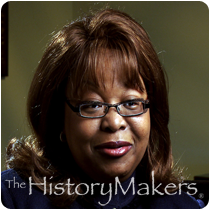 Favorite Color:
Green
Favorite Food:
Goat (Curried)
Favorite Time of Year:
Fall
Favorite Vacation Spot:
Cruises
Favorite Quote:
The Only Helping Hand You Have Is The One At The End Of Your Arm.

Favorite Color:
Green
Favorite Food:
Goat (Curried)
Favorite Time of Year:
Fall
Favorite Vacation Spot:
Cruises
Favorite Quote:
The Only Helping Hand You Have Is The One At The End Of Your Arm.

See how Gwendolyn Smith Iloani is related to other HistoryMakers

Investment Executive Gwendolyn Smith Iloani was born in Jamaica. Iloani came to the United States with her family at the age of six. Her family moved to Brooklyn, New York. Iloani received her B.A. degree in sociology from Colgate University and her M.B.A. from the University of Hartford.

Iloani worked in a variety of insurance and financial firms before founding her own investment company. Iloani began her career as a math analyst at New York Life in the late 1970s and then moved to Connecticut Mutual as a management trainee. In 1980, Iloani moved to Aetna, Inc. where she worked for fifteen years. Iloani worked in the investment department as an investment analyst and ultimately rose to the level of a managing director at a very rapid pace. In 1994, she persuaded senior executives at Aetna to invest $2.5 million in Smith Whiley, the Hartford, Connecticut investment firm she founded and owns. After two years, Iloani bought out Aetna’s interest and Smith Whiley is now owned by Iloani. Iloani is the chairwoman, president and CEO of Smith Whiley & Company, a private equity firm that specializes in providing mezzanine debt and private equity for management buyouts, recapitalizations, acquisitions and growth capital. Smith Whiley is among the largest black-owned private equity firm, and has managed in excess of $600 million. Iloani directs the firm’s investment advisory and asset management business, and the investment and portfolio management activities.

In 2000, Iloani's younger sister Jaleith died of leukemia at age thirty-six and left her three children to Iloani, who now makes time for all the demands of motherhood. In addition, Iloani has a long history of civic involvement with a wide variety of organizations and has received numerous community service and business leadership awards. Iloani is a board member of the NAACP Special Contributions Fund and The Crisis magazine. She was named one of the “75 Most Powerful Blacks on Wall Street” and one of the “50 Most Powerful Black Women in Business” by Black Enterprise Magazine. Iloani is a Trustee of the University of Connecticut Foundation and after serving nine years on the Board of Trustees for Colgate University, she is currently an Emeritus Trustee

Gwendolyn Smith Iloani was interviewed by The HistoryMakers on April 29, 2010.

See how Gwendolyn Smith Iloani is related to other HistoryMakers
Click Here To Explore The Archive Today!