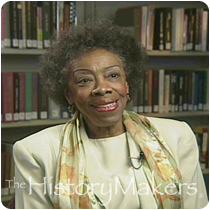 See how Gwendolyn Patton is related to other HistoryMakers
Donate Now

Gwendolyn Marie Patton was born on October 14, 1943 in Detroit, Michigan to Jeanetta and Clarence Patton. After the death of her mother in 1957, Gwendolyn and her siblings moved to Montgomery, Alabama. She attended George Washington Carver High School and graduated in 1961 with academic honors. She went on to receive her B.A. degree in English and history from Tuskegee Institute in 1966.

Patton coined the phrase “scholar-activist” and urged students to work in the community for social, political and economic change. She was also the Direct Action Chair for the Tuskegee Institute Advancement League, which planned strategies to desegregate Macon County in all areas, especially employment.

Though her grandmother’s rental property was the Freedom House that was used by Dr. Martin Luther King, Jr. and the Southern Christian Leadership Conference during the Civil Rights Movement, Patton herself was active with the Student Nonviolent Coordinating Committee.

Patton has made many noteworthy accomplishments, including founding the National Anti-War Anti-Draft Union against the war in Vietnam in 1969, the National Association of Black Students, and the New Alabama New South Coalition. She was selected to be an Aspen Institute Fellow and also wrote and published The Insurgent Memories in 1981. Patton is listed in the International Who’s Who of Intellectuals and is designated as a “Special Scholar” by the Institute of Higher Education and Research at the University of Alabama.

In 1992, Patton became an archivist for Trenholm Technical College, where she has assisted in establishing one of the few archives in the United States at a two year college.

Patton was interviewed by The HistoryMakers on March 19, 2007.

See how Gwendolyn Patton is related to other HistoryMakers
Donate Now
Click Here To Explore The Archive Today!