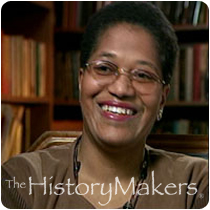 Favorite Color:
Lavender
Favorite Food:
Macaroni, Cheese
Favorite Time of Year:
Spring
Favorite Vacation Spot:
California, Bahamas
Favorite Quote:
Do Unto Others As You Would Have Them Do Unto You.

Favorite Color:
Lavender
Favorite Food:
Macaroni, Cheese
Favorite Time of Year:
Spring
Favorite Vacation Spot:
California, Bahamas
Favorite Quote:
Do Unto Others As You Would Have Them Do Unto You.

See how Gwendolyn Mitchell is related to other HistoryMakers

Editor and poet Gwendolyn Ann Mitchell was born December 27, 1955, in Pittsburgh, Pennsylvania, growing up in Pittsburgh. The daughter of a teacher and a pioneering black police commander, Mitchell attended Lemington Elementary School, Westinghouse High School, and graduated from Allendale High School in 1973. Moving to Dallas, Texas, she was hired as a sales clerk and was promoted to department manager at Neiman Marcus Department Store between the years of 1977 and 1987. Mitchell earned a B.A. in political science from Penn State University in 1988 and a M.F.A. in English poetry in 1991. In 1996, She earned a certificate in arts management from the University of Massachusetts at Amherst.

Between 1989 and 1993, Mitchell worked as a lecturer in Penn State’s English and women’s studies departments, and in 1994, she became a staff assistant to Pennsylvania Senator Harris Wofford in Pittsburgh. She worked for Youth Enrichment Services and the Pennsylvania Council for the Arts in Pittsburgh before moving to Chicago to become Editor of Third World Press in 1997. Working closely with Third World Press founder Haki Madhubuti, Mitchell manages one of the leading independent African American publishers in the nation, whose published authors include Chancellor Williams, Dudley Randall, Jacob Carruthers, Sonia Sanchez, Bakari Kitwana, Useni Eugene Perkins, Sterling Plumpp, Carolyn Rodgers, the late poet laureate Gwendolyn Brooks, Haki Madhubuti, and Gwendolyn Mitchell herself. Mitchell’s latest work, House of Women, reviewed by Gwendolyn Brooks, was published in 2002.

Mitchell is also the author of Veins and Rivers, and a book length poem, Ain’t I Black. She has co-edited two anthologies of creative writing. Mitchell now lives in Chicago with her son, Sankara.

See how Gwendolyn Mitchell is related to other HistoryMakers
Click Here To Explore The Archive Today!