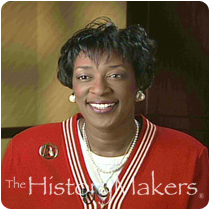 Mechanical engineer and civic leader Gwendolyn Elizabeth Boyd was born on December 27, 1955, in Montgomery, Alabama to Dora McClain. Boyd’s mother passed away when Boyd was thirteen years old, and her godmother, Emzella Mapson, raised her. Boyd's teachers, at the all-black McDavid Elementary School, nurtured her love of math from a young age. Boyd was one of five black students to integrate Jefferson Davis High School in Montgomery, Alabama. In high school. she helped establish a student interracial council, was a member of the math honor society, and performed choir before graduating as valedictorian in 1973. Boyd attended the historically black Alabama State University in Montgomery, Alabama on a scholarship, graduating summa cum laude with her B.S. degree in mathematics and minors in music and physics in 1977. She received a fellowship to attend Yale University's School of Engineering in New Haven, Connecticut, becoming the school's first African American woman to receive an M.S. degree in mechanical engineering in 1979.

Following her graduation, Boyd worked briefly as an engineer at IBM in Kingston, New York. In 1980, she was offered a position as a submarine navigation systems analyst at the Applied Physics Laboratory at John Hopkins University. Boyd was later appointed to high-level administrative positions, first as the assistant for development programs in 1998 and then the as executive assistant to the chief of staff in 2004.

Boyd has been an active member of Delta Sigma Theta Sorority, Inc., rising through the ranks of the sorority's leadership since joining as a student at Alabama State. In 2000, Boyd was elected for a four-year term as the national president of Delta Sigma Theta Sorority. Boyd also serves on the board of directors of Leadership Greater Washington, the Children’s National Medical Center in Washington, D.C., Bennett College and the National Partnership for Community Leadership. She is a member of The Links, Inc., the National Council of Negro Women and Ebenezer A.M.E Church in Fort Washington, Maryland where she serves on the ministerial staff. In 2007, Boyd received her M.Div. degree at Howard University and is an ordained itinerant elder in the A.M.E. Church. She has also received honorary doctorates from Lincoln University in Pennsylvania and Bennett College in North Carolina. In 2010, President Barack Obama nominated Boyd to the board of trustees of the Barry Goldwater Scholarship and Excellence in Education Foundation.

Gwendolyn E. Boyd was interviewed by The HistoryMakers on April 25, 2007.