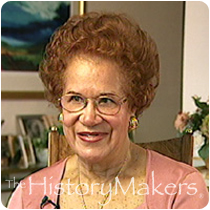 See how Gwendolyn DuBose Rogers is related to other HistoryMakers

Educator Gwendolyn DuBose Rogers was born May 30, 1931, in Birmingham, Alabama, the youngest of three children. She graduated from Fairfield High School in 1948 and earned a B.A. in elementary education from Talladega College in 1952. Rogers received her M.S. in education from the University of Chicago the following year and her Ph.D. in educational psychology from Northwestern University in 1980.

From 1953 to 1955, Rogers worked as a primary school teacher in Chicago Heights, and in Chicago Public Schools from 1955 to 1966. She also spent 1958 teaching at the American Dependents' Schools in Toul, France. Beginning in 1966, Rogers worked as curriculum consultant for Head Start, where she remained for the next eleven years. From 1969 to 1975, she served as director of the Early Childhood Center at Walt Disney Magnet School. In 1972, she was hired as a lecturer at Chicago State University. From 1978 to 1979, Rogers was the director of the master’s of teaching program at Northwestern University and from 1979 to 1981, she taught at the Stockton Child-Parent Center. Rogers was then hired as director of the education department of the Chicago Urban League where she advocated for public education from 1981 to 1993. In 1993, she was appointed director of the Department of Internal Affairs for the Chicago Park District, and from there she retired in 2001.

Rogers has served on the Illinois Community College Board, the Art Institute Advisory Committee and the Board of the Chicago Children's Museum. Her numerous awards include: the Kathy Osterman Award – Outstanding Executive Employee (1995), League of Women Voters of Chicago Civic Contribution Award (1993), Women's Hall of Fame, Chicago Human Relations Commission (1990), and the Award of Merit, Northwestern University (1990).

Rogers is married to former Judge John Rogers, Sr. and lives in Chicago.

See how Gwendolyn DuBose Rogers is related to other HistoryMakers
Click Here To Explore The Archive Today!