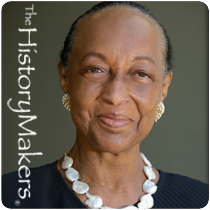 See how Gwen Mazer is related to other HistoryMakers
Donate Now

Fashion and image consultant Gwen Mazer was born in New York City. She was one of two children born to Theodore Goodman, a postal worker; and Edythe Goodman, an educator. Mazer received her education in New York City at the Fashion Institute of Technology and New York University.

Mazer began her career in 1955 as a retail intern at Lord and Taylor’s department store becoming one of the first African Americans to hold a junior executive position at the store. She was a fashion director at Alexander’s Department Store and the stylist for Advertising Images, one of the foremost advertising photography studios in New York City.

In 1968 Mazer became the first African American fashion editor at Harper’s Bazaar creating Bazaar’s Bazaar and Lifestyle for the magazine. In 1970, during her tenure at the magazine, she was the co-founder of Narcissa a New York boutique. In1976 Mazer became the marketing director for Nazareno Gabrielli, an Italian fashion company. She was responsible for opening New York offices and assisting with opening a retail store in Beverly Hills, California.

Mazer was an adjunct professor at the Academy of Art University. She has also lectured at the University of California at Berkeley and the City College of San Francisco; led seminars at the Central California Women’s Conference, the Professional Business Women’s Conference; and served as a guest speaker at the World Affairs Council, the Commonwealth Club, the Jewish Community Center, and the Francisca Club.

Mazer is a charter member of the Association of Image Consultants International (AICI) and served as president of the San Francisco Chapter from 1995 to 1997. Mazer is a former member of the Women’s Professional Network, the New York and San Francisco chapters of the Fashion Group, and the National Association of Women Business Owners (NAWBO). She has served as a board director for the Fort Mason Foundation, the San Francisco Convention Bureau, the Magic Theatre, and currently serves on the board of the International Women’s Forum of Northern California.

Mazer was awarded the highest honor in the image industry when she received the IMMIE award for outstanding professionalism and dedication and has received various honors from the city of San Francisco. Mazer is the author of the award winning book Wise Talk Wild Women and created the Wise Talk Lecture Series. The Friends and Foundation of the San Francisco Library honored Mazer as a Literary Laureate for her book Wise Talk, Wild Women.

Gwen Mazer was interviewed by The HistoryMakers on November 8, 2013.

See how Gwen Mazer is related to other HistoryMakers
Donate Now
Click Here To Explore The Archive Today!