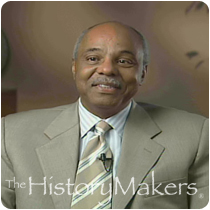 Insurance executive Gregory Wayne Jones was born December 29, 1948 in Newark, Ohio to Newark natives, Mildred Jean Weaver Jones and Gordon Lewis Jones. One of his ancestors built the Bethel A.M.E. Church in Newark in 1841 and many were pioneers at Wilberforce University. He attended Woodside Elementary School, Central Junior High School, and graduated from Newark High School in 1967. Jones joined State Farm in 1968. In 1975, Jones earned his B.A. degree in business from Franklin University and his M.A. degree in 1981 from Hood College. He also attended the University of Pennsylvania’s Wharton Business School and has earned the Chartered Property Casualty Underwriter (CPCU) designation.

Before he was 25 years old, Jones started an NAACP branch, was chairman of a $2 million community action agency, and hosted a community service radio program. He is the founder of 100 Black Men of Sonoma County, California and has served on the national board of directors of 100 Black Men. He is a chairman of the board of the Los Angeles Urban League, the California Education for Excellence Foundation, the Los Angeles Sports Council, and Operation Hope. Jones is past chairman of Junior Achievement of Southern California and is a member of the board of trustees of Franklin University and the National Urban League. Jones was a recipient of Empowerment Achievement Award in 1995; Dollars and Sense Magazine’s Corporate Trailblazer Award in 1998; and was the 2000 honoree of the Insurance Industry Charitable Fund.

See how Gregory Wayne Jones is related to other HistoryMakers
Donate Now
Click Here To Explore The Archive Today!