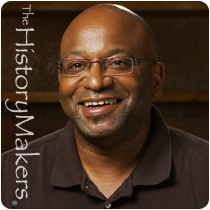 See how Gregory Jenkins is related to other HistoryMakers

Atmospheric scientist Gregory S. Jenkins was born on May 13, 1963 in West Philadelphia, Pennsylvania. As a child, Jenkins was fascinated by the weather. He received his B.S. degree in physics from Lincoln University in Lincoln, Pennsylvania in 1987. Jenkins went on to earn his M.S. and his Ph.D. degrees in atmospheric science from the University of Michigan in 1989 and 1991, respectively. His doctoral thesis was entitled, “An Investigation of Archean Climate using the NCAR CCM.”

In 1991, Jenkins began a postdoctoral fellowship at the National Center for Atmospheric Science (NCAR) in Boulder, Colorado. Two years later, he became a research associate at the Earth Systems Science Center at Pennsylvania State University. In 1996, Jenkins served for a semester as an assistant professor of physics at Howard University before joining Pennsylvania State University as an assistant professor in the Department of Meteorology. He was promoted to associate professor at Pennsylvania State University in 2003. In the same year, he received the J. William Fulbright Research Award to go to Senegal and worked at Cheikh Anta Diop University on climate change research. Jenkins returned to Howard University in 2004 as an associate professor and director of Howard University’s Atmospheric Science Program. In 2006, he served as a United States African Monsoon Multidisciplinary Analysis (AMMA) committee member and downstream Special Observing Period 3 (SOP3) member. From 2007 to 2010, he held the position of Department of Physics and Astronomy chair. Jenkins’ research focused on tropical storm systems, monsoons and hurricanes. He has travelled all over the world to conduct his research including Senegal, Cape Verde and Barbados. Jenkins has published over forty peer-reviewed publications and was an editor and contributor to the text The Extreme Proterozoic: Geology, Geochemistry and Climate .

Gregory S. Jenkins was interviewed by The HistoryMakers on June 29, 2012.

See how Gregory Jenkins is related to other HistoryMakers
Click Here To Explore The Archive Today!