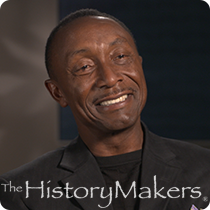 See how Gregory Jackson is related to other HistoryMakers
Donate Now

Automobile sales entrepreneur Gregory Jackson was born on July 12, 1957 in Detroit, Michigan to Doris Hood and Roy Jackson. Jackson graduated from Central High School in 1975. He earned his B.S. degree in accounting from Morris Brown College in 1980; and his M.S. degree in finance and marketing from Atlanta University in 1981.

Jackson began working as an accountant for Arthur Andersen & Company. He then left in 1984 and was hired as a controller for Stroh’s Transportation. While at Stroh’s, he launched The Kastelton Company, a gourmet cookies venture. Jackson then pursued a career in automotive sales, completing the General Motors Minority Dealer Training program in 1989. He launched the Prestige Automotive Group and purchased his first dealership, Prestige Pontiac-Oldsmobile, in 1993. Under Jackson’s leadership, the company grossed $1.67 billion in sales in 2005. In addition to automotive sales, Jackson also purchased The Lafayette Towers in the Mies van der Rohe residential district of Detroit in 2012. Over time, Jackson operated a total of eighteen automobile dealerships, selling all but four: Mercedes-Benz of St. Clair Shores, Toyota of Warren, Courtesy Ford of Okemos and Prestige Cadillac in Warren He was owner and served as a board member of two separate Chinese-American joint venture corporations based in Beijing and Wuhu, China. He also acquired The Lafayette Towers in Detroit in 2012.

For over a decade, Prestige Automotive Group received top rankings on Black Enterprise’s “Auto Dealer 100” list and held the #1 position for six years. The company also received Mercedes-Benz’s Best of The Best Award and the Michigan Chronicle’s Men of Excellence Award. Jackson was named Black Enterprise’s Dealer of the Year and was featured in Crain’s Detroit Business’s “Largest Minority-Owned Business” publication.

Gregory Jackson was interviewed by The HistoryMakers on August 12, 2017.

See how Gregory Jackson is related to other HistoryMakers
Donate Now