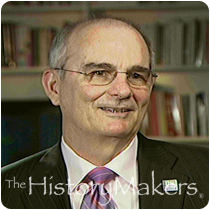 See how Gregory H. Williams is related to other HistoryMakers

Gregory Howard Williams was born on November 12, 1943 in Indiana. At the age of ten, Williams moved from Virginia to the Black housing projects of Muncie, Indiana, where he became aware of his father’s African American heritage for the first time. Despite a period of confusion about his identity, he drew on his father’s passion for education to give him strength during a challenging time in his life.

Williams graduated from Ball State University. He paid for school by working as a deputy sheriff often for more than forty hours a week. Williams then attended George Washington University, earning both his J.D. and Ph.D. degrees.

In 1993, Williams became the Dean of Law and Carter C. Kissell Professor of Law at The Ohio State University and managed to shift the school effectively, increasing both fund raising and national rankings. In 2001, just before Williams left Ohio State University, it became the recipient of the largest gift ever given to the university when Michael E. Moritz, a partner of the Baker and Hostettler firm, donated $30 million to help Ohio State College of Law become a top ten law school nationally.

In 1995, Williams published Life on the Color Line: The True Story of a White Boy Who Discovered He Was Black¸ an autobiography. The Los Angeles Times selected it “Book of the Year,” and Williams was soon featured on television and radio, including Dateline NBC, Larry King Live, The Oprah Winfrey Show, Nightline and National Public Radio. The following year, the Gustavus Myers Center for Human Rights in North America selected Life on the Color Line as an Outstanding Book on the Subject of Human Rights.

In 1998, Williams was invited by President Bill Clinton to join Clinton’s “Call to Action” to promote law office diversity and pro bono work. The following year, Williams was chosen by the National Association of Public Interest Law as “Dean of the Year,” and he was awarded the National Bar Association’s A. Leon Higginbotham, Jr. Award for Contributions to the Preservation of Human and Civil Rights. In 2001, Williams became The City College of New York’s eleventh president. Under Williams, the college increased its enrollment, and maintained its diversity even under more rigorous admission standards. He successfully held the College’s first capital campaign, raising more than $230 million. Williams serves as Chair of the Commission on Access, Diversity and Excellence (CADE) of the National Association of State Universities and Land-Grant Colleges.

Williams was interviewed by The HistoryMakers on May 16, 2007.

See how Gregory H. Williams is related to other HistoryMakers
Click Here To Explore The Archive Today!