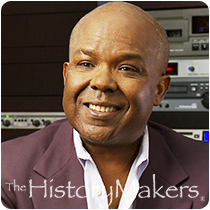 Favorite Color:
Blue
Favorite Food:
Barbecue
Favorite Time of Year:
When It Rains
Favorite Vacation Spot:
Wherever He Can Fish
Favorite Quote:
None

Favorite Color:
Blue
Favorite Food:
Barbecue
Favorite Time of Year:
When It Rains
Favorite Vacation Spot:
Wherever He Can Fish
Favorite Quote:
None

See how Greg Mack is related to other HistoryMakers

Radio host Greg Mack was born on June 22, 1959 in Emory, Texas. He was raised in Van Alstyne, Texas, and started in radio in 1975 as an intern with KTSA in San Antonio, Texas, while still in high school. Mack continued to work for KTSA after graduating from Van Alstyne High School in 1977.

While working at KTSA, Mack was hired part-time as the weekend DJ at KEYS/KZFM in Corpus Christi, Texas. Soon afterwards, he was given a full-time show. When a post at Majic 102 (KMJQ-FM) in Houston, Texas opened up in 1980, Mack was hired to host the six-to-ten shift. In 1983, Mack was named music director at KDAY in Los Angeles, California, where he changed the direction of the station by incorporating rap music. From his position at KDAY, Mack promoted many that would become the most well-known artists of the mid-1980s and early-1990s, such as Dr. Dre and the World Class Wreckin’ Cru, N.W.A, Ice T, and many others. Eventually, KDAY’s popularity was eclipsed by more powerful FM stations, and Mack moved on to Stevie Wonder-owned KJLH in 1990.

After his time at KDAY and KJLH, Mack purchased several radio stations, and acted as a radio station consultant. He signed a contract with MCA Records and released a CD entitled “The Mixmasters.” He then signed with Motown, and in 1989, released a compilation album of hits played at KDAY titled “What Does It All Mean?” He also released a three-CD compilation named “KDAY ‘Mack Attack,’” highlighting his mixing crew the MixMasters, and featuring mix shows, jingles, and show outtakes in 1997. He joined 94.7 the WAVE in 2013 as the Saturday night DJ.

Greg Mack was interviewed by The HistoryMakers on August 2, 2014.

See how Greg Mack is related to other HistoryMakers
Click Here To Explore The Archive Today!