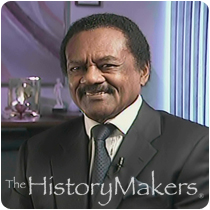 See how Grady Poulard is related to other HistoryMakers

Nationally known motivational speaker and human relations consulting firm owner Grady Emory Poulard was born on August 15, 1936, to Leola Green Poulard and Grady Emory Poulard, Sr. in Crowley, Louisiana. Poulard grew up in Crowley and attended Ross High School, graduating in 1953. He attended Southern University, was elected student body president and served as the editor of the school’s newspaper. Poulard graduated from Southern University in 1957, and received a Rockefeller Fellowship, earning his M.A. degree from Yale University in philosophy and religion thereafter. Poulard also earned his M.A. degree in urban affairs at Columbia University, and is a graduate of the Pacific Institute Graduate Trainer Program.

After college, Poulard began working as an assistant to minister and civil rights activist Dr. Gardner Taylor and held the position of Director of Education at the Concord Church of Brooklyn, New York. He, then, served as an international field representative of the U.S. Student Christian Movement in Europe, Africa, and the Middle East. Between 1962 and 1964, Poulard served as dean of the Chapel at Christian Medical College in Vellore, South India. In 1965, Poulard became pastor of Peoples Congregational Church in Washington, D.C. He soon became involved in the Civil Rights Movement, as a field executive for the Council of Federated Civil Rights Organizations. This included the NAACP, SCLC, CORE, and SNCC.

In 1969, Poulard became a National Urban Fellow at Clairmont College and decided to go back to school and earn his M.A. degree in urban affairs from Columbia University. In 1970, while working at the American Institute of Architects, Poulard and Robert Nash developed the National Organization of Minority Architects (NOMA). In 1972, Poulard served as special assistant to the Mayor of Washington, D.C. and became the executive director of the Independent Foundation. In 1974, Poulard became the Director for Human Relations for the U.S. General Accounting Office. Poulard is the president of his own management and human relations consulting firm called GPA, Grady Poulard Associates, which he formed in 1975. He is a member of the National Urban League, a board member of the YMCA of Metropolitan Washington, D.C., is involved with the Black Executive Exchange Program, and is a part of the liaison staff of the White House Conference on Civil Rights.

Poulard has published one book and has contributed articles to several professional journals. He is single, and the father of two sons, Kenneth and Michael.

See how Grady Poulard is related to other HistoryMakers
Click Here To Explore The Archive Today!