Information about A. Grace Lee Mims 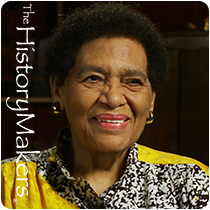 See how A. Grace Lee Mims is related to other HistoryMakers
Donate Now

Radio host and vocalist A. Grace Lee Mims was born on July 17, 1930 in Snow Hill, Alabama to musicians Arnold W. and Alberta Grace Edwards Lee. Mims graduated valedictorian from Snow Hill Institute, which was founded by her grandfather. She went on to attend and graduate from Hampton University in Hampton, Virginia, and later received her M.L.S degree from Case Western Reserve University in Cleveland, Ohio.

Upon graduation, Mims married Howard A. Mims. She was also hired as a librarian in Detroit, Michigan before moving to Cleveland, where she worked at several branches of the Cleveland Public Library. Mims was employed as head librarian at Glenville High School for ten years, where she coordinated the Black Arts Festival, established the most extensive collection of books on African American history and culture in the State of Ohio, and helped found the first Afrocentric lecture course in the Cleveland Public Schools. In 1976, she created and became hostess and producer of “The Black Arts” on WCLV-FM, Cleveland’s classical music radio station. From 1980 to 2010, Mims produced and hosted WCLV’s “Artslog,” a daily five-minute show of interviews. Also in 1980, she was hired as a voice teacher at the Cleveland Music School Settlement.

Mims has served as soprano soloist at Fairmount Presbyterian Church, as soloist with the William Appling singers, as well as throughout the Cleveland area. She was a member of The Cleveland Orchestra Chorus and Chamber Chorus under Robert Shaw, and performed with The New York Bass Violin Choir. In addition, Mims has recorded two albums: “Spirituals,” a solo record, and “A Spirit Speaks” with her family’s jazz-folk ensemble, The Descendants of Mike and Phoebe.

A. Grace Lee Mims was interviewed by The HistoryMakers on February 14, 2014.

See how A. Grace Lee Mims is related to other HistoryMakers
Donate Now
Click Here To Explore The Archive Today!