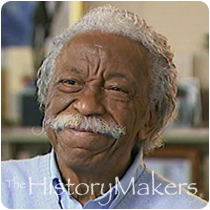 See how Gordon Parks is related to other HistoryMakers

A versatile and prolific artist, Gordon Parks, Sr., warrants his status as a cultural icon. The poet, novelist, film director, and preeminent documentary and fashion photographer was born on November 30, 1912, in Fort Scott, Kansas, the youngest of fifteen children. Parks saw no reason to stay in Kansas after the death of his mother and moved to St. Paul, Minnesota, at age sixteen to live with his sister. After a disagreement with his brother-in-law, Parks soon found himself homeless, supporting himself by playing piano and basketball and working as a busboy.

While working on a train as a waiter, Parks noticed a magazine with photographs from the Farm Security Administration (FSA). The photos by such documentary photographers as Dorothea Lange, Russell Lee and Arthur Rothstein led him to Richard Wright’s 12 Million Black Voices, other photo essays about poverty and racism, and the social and artistic voice he had been seeking. Parks bought a used camera in 1938, deciding on a career in photography. In 1941, Parks received a fellowship from the Julius Rosenwald Foundation to work with Roy Stryker at the photography section of the FSA. In Washington, D.C., he trained as a photojournalist. He would work with Stryker for the next few years, producing work and honing the modernist and individualistic style he became known for by photographing small towns and industrial centers throughout America.

By the end of the 1940s, Parks was working with Life and Vogue and in that capacity did some of his most famous work. Traveling the globe and covering issues as varied as the fashion industry, poverty in Brazil, the Nation of Islam, gang violence, and eventually celebrity portraitures, Parks continued to develop and create new ways to convey meaning through his work.

Branching out from his photography in 1963, Parks directed his first film, The Learning Tree, based on his autobiographical novel of the same name. Parks went on to direct many films, including Shaft in 1971. In addition to film, Parks composed music and written several books including: A Choice of Weapons (1966), To Smile in Autumn (1979), Voices in the Mirror (1990), Arias of Silence (1994), and a retrospective of his life and work titled Half Past Autumn (1997), which was recently made into an HBO special.

See how Gordon Parks is related to other HistoryMakers
Click Here To Explore The Archive Today! 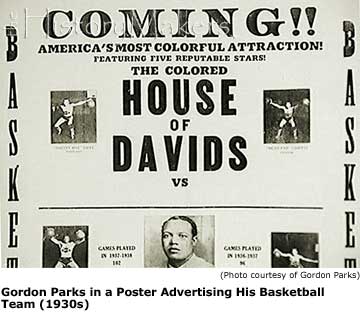 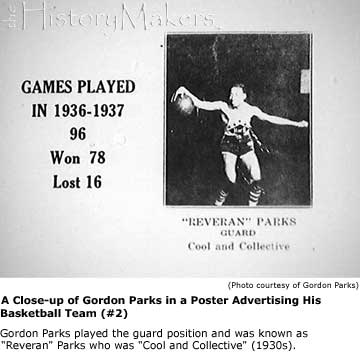