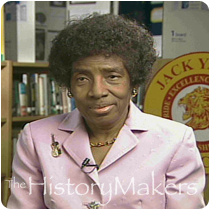 See how Gloria Scott is related to other HistoryMakers
Donate Now

Gloria Dean Randle Scott was the eleventh president of Bennett College located in Greensboro, North Carolina. She was the second female chief administrator at Bennett College. Scott was born on April 14, 1938 in Houston, Texas to Juanita and Freeman Randle. She attended Blackshear Elementary School and Jack Yates Secondary School where she graduated from in 1955. A scholarship fund afforded Scott the opportunity to attend Indiana University. She received her B.A. degree and M.A. degree in zoology in 1959 and 1960, respectively, and her Ph.D. in higher education in 1965.

In 1961, Scott’s career began as a research associate in genetics and embryology at Indiana University Institution for Psychiatric Research. During this time, she worked as a biology instructor at Marion College until 1965, making her the first African American instructor at a predominately white college in Indianapolis, Indiana at the time. Scott held the positions as Dean of Students and Deputy Director of Upward Bound at Knoxville College in 1965 and as the Special Assistant to the President and Educational Research Planning Director at North Carolina A&T University in 1967. During her ten year tenure, Scott continued to make history by becoming the first African American National President of the Girl Scouts in 1975. She then served as the Institutional Research Planning Director at Texas Southern University for a year before becoming Vice President at Clark College in Atlanta in 1977.

Scott is the recipient of three honorary doctorate degrees. She has been featured in several publications such as Who’s Who Among American Women, Famous Texas Women and Essence magazine.

Scott is married to Dr. Will B. Scott, a professor of sociology.

Scott was interviewed by The HistoryMakers on February 8, 2007.

See how Gloria Scott is related to other HistoryMakers
Donate Now
Click Here To Explore The Archive Today!